The impact of the civil war which began in late 2013, coupled with an ailing economy and high food prices, led to famine being declared in 2017 in South Sudan’s Unity State. 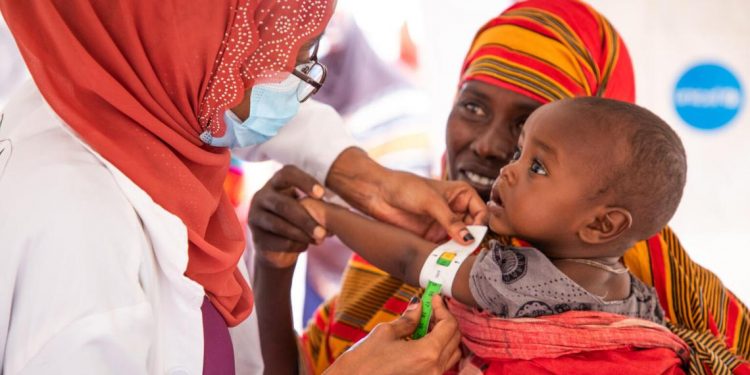 A health worker at a site for internally-displaced persons in Ethiopia measures the arm of a child to assess his nutrition status.

Famine will occur in parts of Somalia between October and December, the United Nations warned this week, as drought worsens and global food prices hit record highs.

Somalia and its neighbours in the Horn of Africa, including Ethiopia and Kenya, are in the grip of the worst drought in more than 40 years, which has wiped out livestock and crops. Four consecutive droughts, the ripple effects of the Ukraine war, climate change and Covid-19 have created the direst of conditions in the region. A fifth consecutive season of abnormal rainfall levels is now predicted, the war in Ukraine continues, the world is getting warmer and the pandemic has not gone away.

The UN’s World Food Programme (WFP) estimates that the number of people at risk of starvation across Ethiopia, Kenya and Somalia had increased to 22 million. In Somalia alone, the number of people facing crisis hunger levels is 7.8 million, or around half the population, while around one million people have fled their homes in a desperate search for food and water. One-in-three children is facing chronic malnutrition.

Here are five things you need to know about famine

It is characterised by the following three criteria occurring simultaneously:

20% of households face an extreme lack of food – 30% of children suffer acute malnutrition – 2 adults or 4 children in a population of 10,000 people die every day due to outright starvation or to the interaction of malnutrition and disease.

2. Who declares a famine?

A famine is typically declared by the governing authorities or the UN. This is done on the basis of data collection and analysis by a country-level IPC (Integrated Food Security Phase Classification) Technical Working Group which is verified by a Famine Review Committee (FRC) which is a team of leading independent international food security and nutrition experts.

3. Have there been famines declared recently?

In the past 10 years, the Horn of Africa has endured three periods of continuous drought (2010/11, 2016/17 and 2020-2022) at the regional level. The 2010/11 drought, combined with conflict and difficulties reaching people in need, caused famine in Somalia. A quarter of a million people died.

The 2016/17 drought brought millions of people in the region to the brink of famine, which was prevented only through a rapid and timely humanitarian response. Sufficient funding, early warning and action, a coordinated response, unimpeded humanitarian access and cessation of conflicts are all critical to averting famine and preventing large-scale loss of life.

The impact of the civil war which began in late 2013, coupled with an ailing economy and high food prices, led to famine being declared in 2017 in South Sudan’s Unity State.

Conflict often leads to population displacements, reduces access by people to land for cultivation or grazing of livestock, leads to the destruction of food stocks, impedes security of trade, and disrupts people’s traditional ways of dealing with food scarcity. It also impedes humanitarian access to critical aid (aka humanitarian access).

Natural Hazards, such as drought, flooding, and cyclones, as well as human and animal diseases and crop pests, affect food production and availability.

Inadequate Humanitarian Response: When a shock occurs, and the humanitarian response is not well resourced, well planned and coordinated, targeted, early or fast enough, the affected populations can only cope for a short period.

5. How has the Ukraine war affected the Horn of Africa?

The Horn of Africa relies on Russia and Ukraine for more than 90 per cent of its wheat supplies. The knock-on effects of the war in Ukraine, such as supply shortages and rising fuel costs, have spiked food prices. This is disproportionately affecting the most vulnerable people, especially subsistence farmers and people in conflict-affected areas. Families can no longer afford even basic items. In June, the average cost for a household to meet its basic food needs was at its highest in five years.