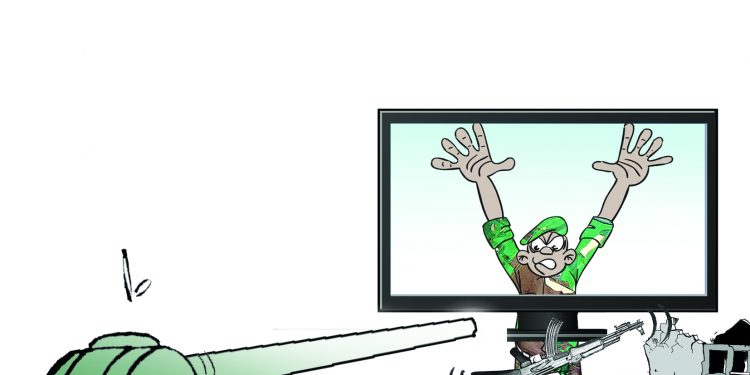 𝔼𝔻𝕀𝕋𝕆ℝ𝕀𝔸𝕃 | Just how easy is it to be a hero, insurgent, or terrorist? It depends on where you are and who you are, it seems.

A week into the Russian invasion of Ukraine, the Western media have struggled and exposed their hypocrisy, with some journalists even wondering why white people in “civilized” Europe are fighting.

For those of us in the global south, where poverty, disease, and conflict had been our description, the Russian invasion only proved that we are all human after all.

Except this is problematic for the Western media. Let’s begin with the invasion itself. Russia’s forcible entry into Ukraine deserved no other term, and we agree that this was an invasion. But Russia isn’t the only world power to have invaded another. The US had done so for years. But when they did enter Iraq in, 2003 ostensibly to remove Weapons of Mass Destruction, some Western media called it liberation. Of course, there were no weapons of that kind, and the liberation only ended up removing Saddam Hussein, leaving Iraq in a situation we cannot describe as liberated.

Still, in Ukraine, a marine who destroyed a bridge and halted advancing Russian forces was declared a hero, and The Daily Mail ran with the story. The soldier blew himself up in a suicide mission, ostensibly to save his country from advancing Russian forces. In Iraq, when resistant forces blew up bridges, they were labeled terrorists. They aimed to stop advancing US forces.

This type of destruction to limit enemy advance had been there in the Iraqi war, and it fueled fears among planning allied forces that toppling Saddam Hussein would not be easy. The Guardian reported on a “scorched earth policy” and accused Saddam of planning to “destroy everything in the path of US and British assault.” Not to mention that the people had also labeled Saddam as probably planning to harm his people “perhaps by use of weapons of mass destruction or denial of food” to slow down US assault.

If at all defense forces do anything to limit enemy advances, why then is it that reportage of events in both spheres of the world is never the same? The answer may lie in racism, which may have shaped our newsrooms.

Ugandan journalist Jacky Kamengisa, perhaps with a tongue-in-cheek, ripped through the racist attitude. Writing on Twitter, she said Western media had had a script all these years.

“First, you provide context by comparing wars in the Third World. Leave out some facts like how the Imperialist States fund these wars. Make sure these countries seem like war-thirsty zombies in comparison to peaceful Europe. Bonus points if you throw in Iraq Afghanistan as examples,” she said.

A CBS correspondent had appallingly declared on TV that Ukraine was never expected to be at war like you would think of Afghanistan because it is “relatively civilized.” When Petro Poroshenko, the former Ukrainian President, picked up his Kalashnikov, Western media described him as a hero. In Africa, where armed groups in Cameroon have been fighting the government, Western media has described them as insurgents.

There has been the small matter of prepositions. Russia’s attack is described as that on Ukraine, but Israeli raids are said to be in Gaza, a territory belonging to Palestine.