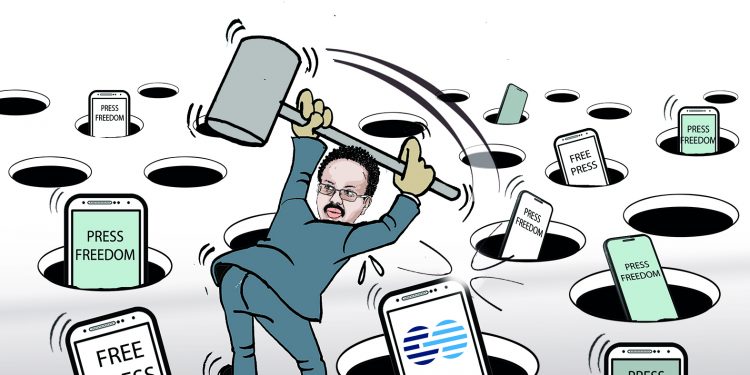 EDITORIAL – Garowe Online this week stands firm in rejecting an attempt by federal government agents to intimidate its reporting on political events in the country. On Thursday, we were shocked when government officials with a pedigree to protect the law, more or less civil liberties, were the first to accuse us of spreading fake news, hate, and defamation.

We reject the accusation, which we see as a sum of recent bids to tarnish the name of Garowe Online and expose us to a bunch of online bullies. The officials in question are not ordinary; they speak for the President most time. Mr. Abdirashid M Hashi, the Federal President’s spokesman, and Mr. Abdinur Mohamed, the Deputy Chief of Staff for the President, descended on us on Thursday, accusing us of lying.

The basis of that allegation was that we had spotted their celebrations when Puntland Vice-President Ahmed Karash announced he would be interim President  President Abdullahi Deni campaigns for the federal presidency in Mogadishu. Later, those statements were deleted but what they forgot is that the internet never forgets.

We believe we reported accurately on the fact that they had punched the air about the ascend of Karash, even though the law is unclear on whether Deni is incapacitated to play Presidential duties while he campaigns. Puntland law is also silent on whether a president seeking federal powers must resign his state post.

So, from the outset, to accuse Garowe Online of lying to a public it has a duty to inform is first inflammatory and just sheer flagrant. If anything, both Mr Hashi and Mr Mohamed should be accused of the very crime of spreading hate, turning the public on us like a lynch mob.

Granted, Somalia is not the best place for media freedom. Intimidations happen all the time from al-Shabaab to politicians to government operatives including spy agents. That these two officials pointed a finger at us is neither strange nor unexpected. Yet we have always stood firm for a free press.

Since we launched in 2004, Garowe Online has risen from a small stub in the bin to a verifiable platform that reports based on accuracy and public interest. We began when there weren’t many credible news sources for Somalis in our country. We rode the tide of al-Shabaab, of poverty and of illiteracy to what we are today because we have always done what is believable. It doesn’t mean we have never erred. What we do is to always correct ourselves whenever we misstep, because we owe it to our readers.

We will not stop reporting on the misdeeds of the Farmaajo administration just because two overreaching civil servants want us to stop. We will not stop reporting on the political maneuvers in our country just because our words have stepped on certain toes. In any case, for the last four years, we have become accustomed to intimidation, physical harm and manipulation of the media so it doesn’t report the evils of the government.

We will be neither a mouthpiece nor puppet of the government. We will report the truth, all the time.

EDITORIAL | Somali MP Amina Mohamed Abdi was one of the glowing flowers in our chaotic but nascent democracy. Last week, as she campaigned to seek reelection, a...