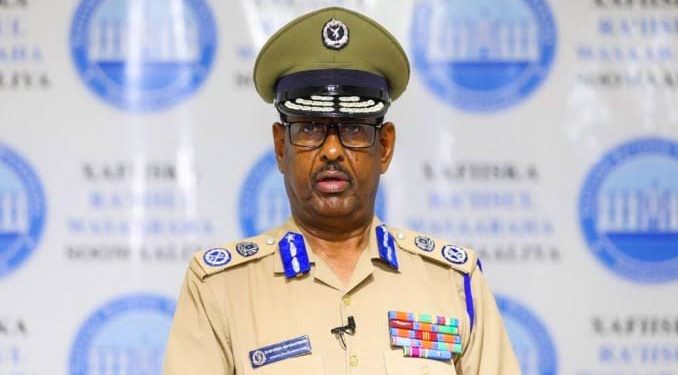 MOGADISHU, Somalia – Police chief Major General Abdi Hassan Hijar has been put on the spot for “exposing” newly elected MPs to security threats following an incident on a famous beach in Mogadishu which claimed the lives of six civilians, just a few meters from where legislators had gathered for a meeting.

At Lido beach restaurant, Al-Shabaab militants targeted General Hijar and legislators, with multiple sources confirming that most officials within the vicinity were unharmed, poising questions about the security of government officials.

“There was a blast in the restaurant presumably caused by a suicide bomber, but we are not sure [about] … the cause,” said police officer Mohamed Ali. “The police commissioner was inside the restaurant when the blast occurred, but he is safe [as are] several legislators who stayed there,” he told AFP.

“Six people died, and seven others were wounded in the blast,” Abdikadir Abdirahman, director of the Aamin Ambulance service, told reporters. The Al-Shabaab militants took responsibility for the attack.

“Our special operations unit was responsible for the attack on government top officials including the police chief and apostate lawmakers; the attack has resulted in deaths and injuries among those at the scene in Abdul Aziz district,” the group said.

The incident comes just days after Al-Shabaab militants also targeted the Somali parliament, with the militants firing mortar shells. At the time of the incident, no lawmaker was armed, further raising questions about their safety.

Details gathered by The Garowe Online indicate the police chief was in his car when the blast occurred after his bodyguards fled the scene with the police chief. It’s also suspected that the guards could abandon the officer when he was also exposed to danger.

Further, sources infer that the event, which Hijar organized, was a political event as the national presidential poll looms. Hijar, the head of the election security, is a close ally of the outgoing president Mohamed Abdullahi Farmajo.

It’s not clear why the police boss would organize an event of political nature without mobilizing security forces, given that lawmakers were expected at the event. Usually, political events are guarded by security forces.

A security expert who talked to The Garowe Online claimed it was a security breach to organize such an event without proper security. Reports indicate lawmakers who attended the meeting were from a specific region within the country.

Cases of Al-Shabaab militants targeting senior government officials, security forces, and civilians are common in Somalia. There are claims of serious infiltration by Al-Shabaab in critical security forces, especially in the National Intelligence Security Agency [NISA].

Although the government denies such allegations, a report tabled by the United Nations Independent Experts showcased that the militants controlled several security departments, further raising suspicions that Farmajo could be colluding with these criminals to destabilize the country to his advantage.