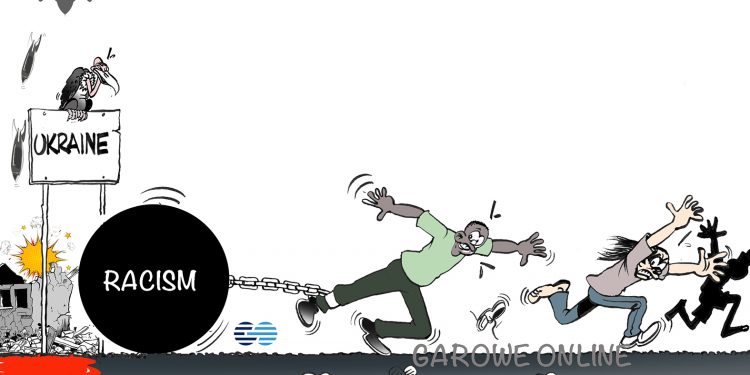 Fighting between Russia and Ukraine continued for the fourth day on Sunday as Moscow continued to shell top cities in Ukraine amid pressure from world powers to have President Vladimir Putin shelve his latest tactic of supporting separatists in the neighboring country.

Former military officers and civilians have already been armed in Ukraine to fight against advancing Russian troops keen to take over Ukraine’s capital Kyiv, which has already been targeted by rockets, leaving at least 241 civilians dead.

But even in the middle of the war, there are severe claims that Black Africans are not allowed to access countries neighboring Ukraine, leading to questions about their compromised safety in the European nation.

According to Femi Fani-Kayode, a Nigerian activist, Poland and the other European nations that border Ukraine only allow fleeing Ukrainians, Indians, Arabs, and other nationals to cross their border and take refuge in their countries.

Poland & the other European nations that border the Ukraine are allowing fleeing Ukrainians, Indians, Arabs & other nationals to cross their border and take refuge in their country. The only people they are barring are black Africans & right now there are hundreds of African..1/ pic.twitter.com/k6GpdgqJem

However, he claims, the only people they are barring are black Africans & right now, there are hundreds of African students stranded on the Polish border. Worst of all is that the Ukrainians themselves are not allowing Africans to board the free trains that they have provided for Ukrainians and other nationals to leave Ukraine and flee to Europe, he adds.

There are reports that the Ukrainian police got on these free trains and removed all the Africans, saying they had to stay. At the same time, they allowed nationals from all other countries, including India, etc., to proceed. That is how low down the ladder Africans are now. It is so sad, and I am glad that the BBC has reported it, he notes.

“Treating Nigerians and other Africans with such contempt is unacceptable. Do our people not have the right to flee from Russian bombs and carnage and save their lives? This is nothing but pure racism, and it is evil,” the activist noted in a tweet that has since gone viral.

Garowe Online cannot independently verify the reports. Still, a viral video making rounds on social media indicated that Ukrainian nationals and the police were blocking Africans from boarding trains as they tried to leave the country, which is under attack from Russia.

Somalia has since written to neighboring countries with Ukraine, requesting them to accommodate her nationals as they push to find the best ways for evacuating them. There are dozens of Somali residents in the European nation currently under attack.

British Ambassador to Somalia, Kate Foster, added: "The situation is extremely worrying, with millions of people in desperate need of life-saving food and clean water.