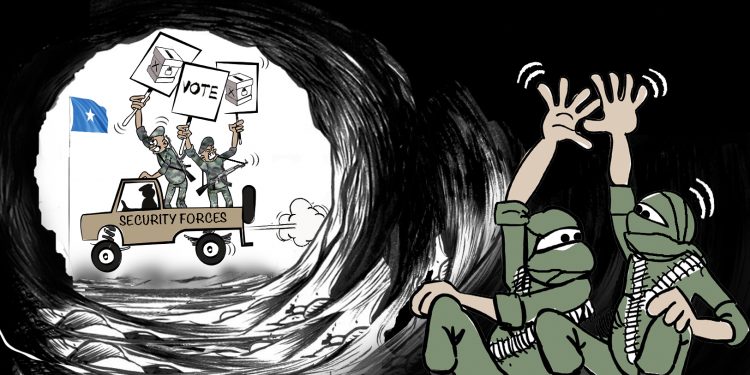 EDITORIAL | Puntland, Somalia’s oldest federal-state, does not usually have its people living by looking over their shoulders. By this past week, two attacks from improvised explosive devices (IEDs) in Bosaso have raised fears of the region plunging into Shabaab terror merchants.

One attack targeted elders, while the other was aimed at Puntland President Said Abdullahi Deni. After surviving the incident, Deni shrugged it off as a usual cowardly incident. But it raised questions on the security situation in Bosaso, Puntland’s commercial capital.

To understand the security dynamics in Puntland, however, we must look at the situation in the federal member states (FMS) overall.

Puntland succeeded in taming al-Shabaab and other militant groups because it had stronger localized security arrangements. Its roads had no illegal roadblocks and the improved system of paying civil servants and security forces on time helped reduce chances of villages and towns falling among militant controls.

But Puntland, still, attracted both al-Shabaab and ISIS. It is the only FMS with both cells active on Somalia soil in the same place, in Sanaag and Bari regions. However, it is remarkably the only FMS with no district headquarters or population center controlled by the insurgents.

Besides a patriotic civil service, Puntland has also profited from local support and legitimacy of the Puntland state administration to prevent infiltration by the terror groups.

When it started, delayed pay or irregular salaries may have been the perfect fertile ground to sow the seeds of insurgency. Thankfully, the militants didn’t take advantage yet, and the situation got better.

Nevertheless, the presence of AS and IS-Somalia in the mountains, where they have plenty of water and hiding places, makes it tricky for the state to bring them to their knees. Initially, the groups were kept at bay by allied airstrikes and the special operations forces, the Puntland Security Forces (PSF). A faction of PSF has, since last November, downed their tools. It arose from their mutiny where they protested the sacking of their commander.

It is symbolic of a federal government’s hidden hand. In Mogadishu and other FMSs, the government has been under siege and retains little control beyond its seat of power. All cities in southern Somalia are virtual islands, with the roads held by Al-Shabab.

The reason? The security forces that would have opened these roads are used for petty political infighting and scoring. In its electioneering schemes, the Mogadishu administration has used security forces to implement its strategy across all FMSs. Only Puntland had resisted this ploy. The PSF mutiny, however, hand fingerprints of that plot written all over it. Here, it has used its political influence to undermine the administration.

It didn’t begin today. From mid-2018, outgoing President Mohamed Farmajo and the entire Somali government were involved in attempts to destabilize Puntland politically. The government sent funds to try to influence the outcome of the 2019 Puntland elections, only for its desired candidate to be subjected to a humiliating loss.  Afterward, the same Mogadishu administration attempted to subvert the new Puntland government by introducing a no-confidence vote in the Puntland parliament.

The Mogadishu influence did not end there. The PSF mutiny of November 2021 and the subsequent infighting in Bosaso occurred with much encouragement from Villa Somalia. This, in turn, is threatening to weaken Puntland’s ability to keep AS and IS-S occupied in their mountain hideouts. Without being forced to fight a defensive war, these groups have found the necessary space to ratchet up operations in the urban areas.

President Deni’s current overtures to the elders in Bari and his attempts to reconstitute the PSF could not have come at a more crucial period. This will not only improve security in the short term but will prevent the security forces in Puntland from dissolving into the political sphere.