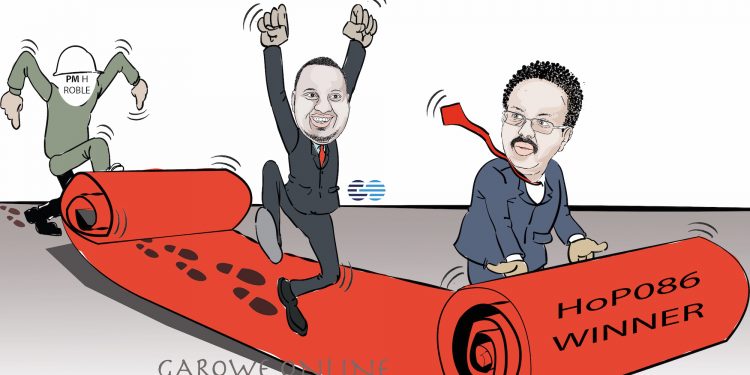 For some time now, Yasin has been in the center stage of the disagreements between the two, almost bringing down the electoral exercise in the country. Yasin is a controversial figure in Somalia’s unpredictable, futile politics.

The predicaments of former spy chief Fahad Yasin took a new twist on Monday following the suspension of his victory, announced by the regional electoral commission as the winner of the controversial HoP86 seat in Hirshabelle.

Yasin, a former Al-Jazeera journalist who has often been linked to Qatar’s alleged interference with Somalia’s internal affairs, hailed his victory as a “manifestation that indirect polls are working in Somalia.”

He arrived at Beletwyene on Sunday before getting clearance hurriedly and subsequently winning the disputed elections. Yasin was to join fellow spies Abdullahi Farey [current acting NISA chief] and Kulane Jiis, who has since been elected.

The Federal Electoral Implementation Committee [FEIT] Chairperson Muse Gelle insisted that the outcome of HoP86 had been suspended, although state media reported that the election was nullified following complaints by elders.

In a Facebook post, the commission published five seats in Hirshabelle but excluded Yasin’s victory, further showing that it had canceled the election. The exercise took place in Beletwyene town in Hirshabelle, moments after a bomb blast that killed over 13 people.

“The Federal Electoral Commission [FEIT] has not changed its decision to suspend HOP086, so the results of today’s action are invalid,” the commission said in a statement. The commission had said last week that the page was hacked.

For months, the opposition has accused Farmaajo of stage-managing elections in favor of his lieutenants ahead of the upcoming presidential elections. The outgoing president is facing stiff competition from among others, former Presidents Sharif Sheikh Ahmed, Hassan Sheikh Mohamud, Puntland President, and Abdirahman Abdishakur, along with former PM Hassan Ali Khaire.

Unconfirmed reports implied that a secret meeting between Ex-spy chief Fahad Yasin and members of the federal electoral body bore no fruit following the commission’s decision to nullify Fahad’s victory as the winner of the HoP086 seat. FEIT had ruled the postponement of the seat.

Interestingly, despite a clause demanding that state officers running for elections ought to resign, it’s not clear if Yasin, Farey, and Abdullahi Kulane resigned from their current positions. Yasin is linked to the murder of former NISA cyberspace boss Ikran Tahil.

So divisive was the matter that the PM ordered the suspension of Yasin and his colleagues in the spy agency.  The differences have led to a fierce battle between Farmaajo and PM Roble. Their differences have often triggered delays in the current electoral process.

But on Wednesday, the Federal Electoral Disputes Resolution Committee cleared Fahad Yasin, meaning that he will resume duties as the official representative of the HoP086 seat. The state had been facing allegations of voter bribery and rigging.