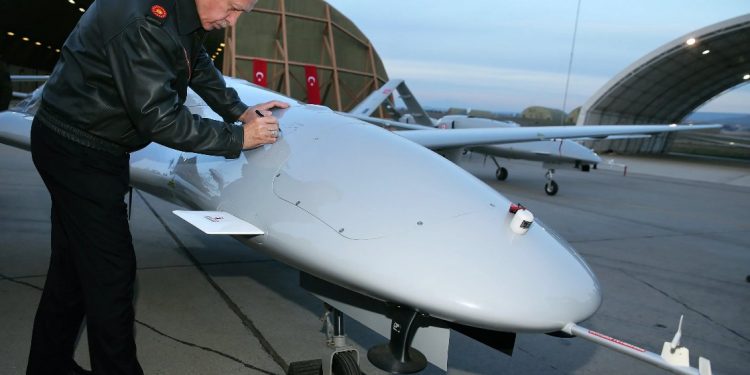 Turkish authorities may be in trouble yet again following an exclusive report which has linked Ankara to drones used by Ethiopia National Defense Forces [ENDF] in bombardments across the Tigray region for the last three months.

A report published by Politico indicates that there is massive evidence to implicate Turkey in the Tigray massacre, particularly bombings that have been taking place lately, mainly targeting innocent civilians.

The publication says it has concrete evidence showcasing that, indeed, Turkish-made drones were used in an incident where close to 58 people were killed in Tigray. However, Ankara has persistently denied these reports.

President Recep Tayyip Erdoğan has been under pressure from the international community over the exportation of drones. The latest incident could further put him at loggerheads with NATO countries for arming Ethiopia.

For months, the Tigray Defense Forces [TDF] has accused Addis Ababa and Asmara of launching airstrikes in Tigray even after it retreated, but even as late as last week, there were reports of airstrikes in Western Tigray, which is the most affected by the 15-month war.

Most of the evidence published by the Politico on Turkish drones in northern Tigray was given by aid workers with some photographs showing exploded shards of a laser-guided bomb used in a strike on the town of Dedebit late on the night of January 7. The attack hit a school holding internally displaced people, including children, according to aid workers and Tigrayan leaders.

Military experts from Dutch nongovernmental organization PAX and Amnesty International identified the weapon used as a MAM-L bomb fitted to a Turkish Bayraktar TB2 drone. The Bayraktar drones are made by a company in which Erdoğan’s son-in-law is a senior executive, the publication notes.

Last year, Ilhan Omar, the Minnesota 5th District congresswoman, put to task the State Department to explain claims of importation of Turkish drones by Ethiopia. Molly Phee, the Assistant Secretary of State, noted that the US was investigating multiple incidents related to the quest.

Turkish diplomats posted to Ethiopia did not respond to repeated requests for comment. Questions on the use of the MAM-L munition put to Turkish government spokespeople in Ankara also went unanswered. Billene Seyoum, a spokeswoman for Ethiopian Prime Minister Abiy Ahmed, and Ethiopia’s military spokesman Colonel Getnet Adane did not reply to requests for comment sent by email and text message, the publication adds.

While the ENDF has access to drones, the Tigray fighters, seized several parts of the country, do not have that privilege. The two sides fell apart following a contested election date, leading to TDF’s unprecedented attack at the Northern Command.

“He underscored that the U.S. is making clear to all external parties engaged on all sides of the conflict that now is the time for all outside actors to press for negotiation and end the war,” State Department representative to Horn of Africa Jeffrey Feltman said.

Wim Zwijnenburg, the project leader of humanitarian disarmament at PAX, which identified the MAM-L weapon, said Turkey could not wash its hands of the matter.

“There is a powerful case to make that these drones should never have been exported at all,” he said, noting that Turkey is a signatory to the U.N.’s arms trade treaty, which stipulates a risk assessment should be done on the potential of human harm before a sale is carried out. (While Turkey signed the pact in 2013, it has not ratified it.)

Zwijnenburg also stressed the need for information on the potential involvement of Turkish personnel in the deployment of the weapons.

“Because this is the technology that requires a lot of maintenance and piloting, Turkey could be made directly responsible if there is a consistent pattern of drone strikes used against civilians and Turkish crew is on the ground doing maintenance on the drones,” he said.

Spokespeople for the Turkish presidency and foreign ministry did not respond to questions from POLITICO on whether Turkish citizens were involved in piloting the drones or whether they were helping train people to use drones.

While Ankara had no comment on the use of Turkish drones, Zwijnenburg said that satellite imagery his organization had acquired identified a TB2 drone in Bahir Dar in the region bordering Tigray on December 16 last year. The identification was possible thanks to the unique dimensions of the wingspan and the length of the aircraft. That location would enable the unmanned aircraft to reach several targets in Tigray, including Dedebit.

In August, Abiy and Erdoğan signed cooperation deals in the water, financial and military sectors.

The drones are manufactured by the company Baykar where Selçuk Bayraktar, the son-in-law of President Erdoğan, works as chief technology officer. Africa has become a key export market for Baykar following sales to Morocco and Tunisia in September last year. Baykar did not respond to a list of questions about the strike in Ethiopia.

Somalia, where Ankara already has a military base, Nigeria and Angola have also expressed an interest in doing a deal for the drones, according to two European diplomats speaking on the condition of anonymity as they are not authorized to speak publicly.

“Everywhere I go in Africa, everyone asks about UAVs,” Erdoğan said in remarks carried by the Anadolu news agency after a visit to Angola, Nigeria, and Togo in October, referring to unmanned aerial vehicles.

Ethiopia is on the brink of collapse even after Prime Minister Abiy Ahmed indicated that he’s ready for national reconciliation. Attempts by AU representative Olusegun Obasanjo to bring the two sides together have not borne fruits.

Abiy Ahmed, the Nobel Peace Prize winner of 2019, has been struggling to contain violence in Ethiopia but his efforts have been met with resistance from several groups across the country. His critics paint a dictatorial picture of him, a claim he persistently denied.