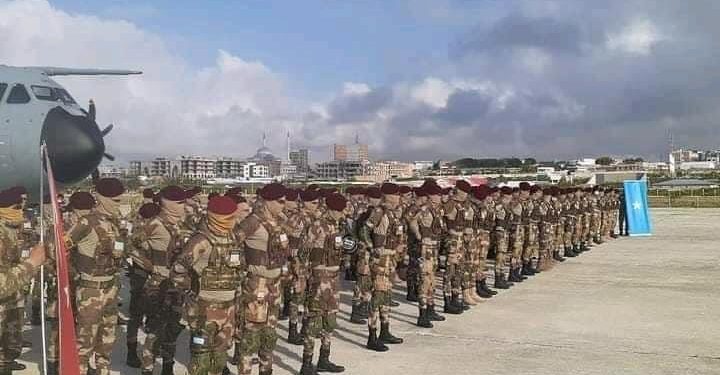 The federal government of Somalia has dispatched hundreds of Turkish-trained troops to Beletwyene, a town in Central Somalia witnessing political tensions for the last couple of months.

Regional President Ali Gudlawe has not been able to access the town, with the main rebel group accusing him of insincerity and dishonesty while calling for ‘secession’ from the state. The regional leader is accused of impunity.

According to reports, the government dispatched Gorgor troops and Haramcad police trained in Turkey on Monday. The regional leader who has been under pressure is a close friend of outgoing President Mohamed Abdullahi Farmaajo.

Reports indicate that about 400 troops landed at Ugaas Khalif airport in Beletwyene on Wednesday.  There are possibilities of more troops coming to the region, sources added.

The troops, sources noted, are set to prepare for the arrival of embattled regional leader Ali Gudlawe, who has been blocked from the town for the last couple of months. He’s accused of divisive leadership.

Further, the Hiiraan Revolutionary Council [HRC] Monday entered Beletweyne and occupied strategic parts of the town. There was, however, no clash with government forces.

Reports indicate that the Turkish-trained troops were deployed amid reports of ongoing talks between outgoing President Mohamed Abdullahi Farmaajo and HRC co-leader General Abukar Huud in the capital Mogadishu.

General Hud, the rebel leader, said in a TV interview Monday he was still in support of the HRC and that Gudlawe was not welcome in Mogadishu. Beletweyne is the second polling center for HirShabelle state and has 25 seats.

During Farmaajo’s presidency, Turkish-trained Somali troops were extensively used for political purposes, including attacks on the Federal States, the opposition, the independent media, and peaceful protests in Mogadishu as Somalia is going through a difficult election period.

Opposition alliance in Somalia slam deployment of troops in Beledweyne blames Farmajo for inciting conflict in the Hiran. The move, they said shows that the army is still mixed with politics, called PM to take action, ensure SNA stayed neutral, focused on the AS-ISIS war.