The country is using a transitional constitution which is yet to be adopted, making it difficult for the leadership to handle a number of issues. 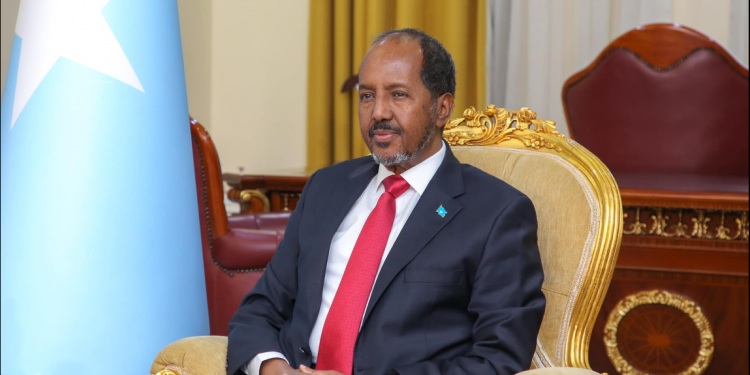 MOGADISHU, Somalia – The president of the federal government of Somalia Hassan Sheikh Mohamud issued a detailed communique moments after concluding a meeting with the Federal Member States [FMS] leaders in Mogadishu, just a few days after his official inauguration.

Mohamud, who served as the country’s president from 2012-to 17, was re-elected last month by the bicameral house, defeating immediate former President Mohamed Abdullahi Mohamed better known as Farmajo, whose relationship with FMS leaders was shaky.

Throughout Farmajo’s reign, both Jubaland and Puntland were speaking from a different pages, making it extremely cumbersome for the federal system to work effectively. The federal system was introduced in 2012 after the transitional government completed its work.

On his official Twitter page, Hassan Sheikh highlighted a number of issues that his administration will have an immediate focus on while calling for a commitment from other leaders across the Horn of Africa nation which is struggling with instability.

“Today, I concluded the two-day meeting with the members of the National Consultative Council. The agreed communique evidences our common commitment to creating a Somalia at peace with itself and the rest of the world through constitutional, security, humanitarian and economic cooperation,” he said.

A keen examination of the communique notes that the president asked the five regional leaders and the governor of Banadir to prioritize the completion of the constitution, federal system, national security structure, political stability, uniform electoral system, dialogue with Somaliland, and response to droughts.

The country is using a transitional constitution that is yet to be adopted, making it difficult for the leadership to handle a number of issues. The political stability was a menace throughout the leadership of Farmajo, even leading to protests from the leaders of Jubaland and Puntland.

On the security front, the country is struggling to contain Al-Shabaab militants who are dominant in central and southern Somalia. Currently, the country is relying on the Somali National Army and the African Union Transition Mission troops [ATMIS] who are set to exit in the coming months.

For Somaliland, Hassan Sheikh is keen to reintroduce negotiations with the breakaway region, even after talks engineered by Ethiopia and Djibouti collapsed. Somaliland is currently leading a government parallel to that of Mogadishu.