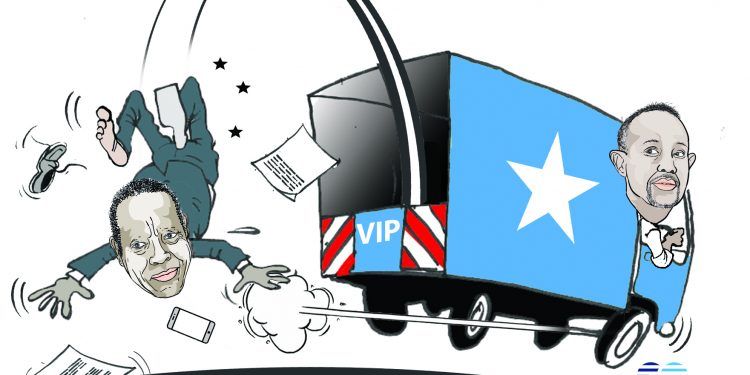 MOGADISHU, Somalia | On Wednesday, Somalia expelled the representative of the African Union Commission, a move that has triggered mixed reactions from across the political divide, and that could potentially have serious ramifications given the country’s political climate.

The PM accused Madeira of “engaging in acts incompatible with his status” in a late-night statement published on Wednesday. The PM, handling elections in the country, urged the AU commission to “comply with this request.”

But in a rejoinder, outgoing President Mohamed Abdullahi Farmaajo rejected Roble’s decision, saying he was unaware of any accusations leveled against the AU envoy, signifying another dispute between the president and the PM.

In a statement, the president said that he had not authorised any action against Madeira. He also had not received any reports from the Ministry of Foreign Affairs of Madeira committing acts against the country’s sovereignty, he said.

According to Farmaajo, the office of the Prime Minister does not have the sole responsibility for making such crucial decisions. Madeira, who comes from Mozambique, has not issued any statement concerning the latest development in Somalia.

But why was he expelled?

The expulsion of Ambassador Francisco Madeira has not come as a surprise. For the last couple of months, Madeira has been entangled in Somalia’s internal politics, leading to protests from the opposition and, at times, from government insiders.

Critics have often claimed he’s President Farmaajo’s “Mr. Fix It” despite his mandate, which dictates that he remains neutral. Previously, the opposition had called for his rustication from Somalia, but Farmaajo has often defended his stay, further raising suspicions among his critics.

Also undermined in the purported audio, whose authenticity cannot be ascertained, are Jubaland President Ahmed Islam Mohamed Madobe and his Puntland counterpart Said, Abdullahi Deni. The two regional leaders have had skirmishes with Farmaajo.

Madeira is also heard saying that opposition figures – ostensibly including the Prime Minister – were capitalizing on the recent killing of lawmaker Amina Mohamed for political gain. Amina was killed in Beledweyne, an incident which government blames on Al-Shabaab. The opposition, however, maintains that it was an assassination.

“This one [attack] was on an MP, but now they [opposition] realized to take Farmaajo on because the possibility of Farmaajo winning, for them, seems to be big. They need to stop that. The idea is not necessarily the lady [MP Amina] herself but the [political] capital she represents,” the audio says.

AMISOM dark past in Somalia

The AMISOM team had been in Somalia since 2007.

ATMIS, the United Nations noted, will serve in the country for the next 33 months before it hands over security responsibilities to the Somali National Army. The new mission will start reducing troops in December, according to multiple sources.

Analysts believe the mission has been embroiled in Somali politics over its tenure, but this has heightened over the past five years, particularly under the stewardship of Francisco Madeira. He is often accused of working closely with Farmaajo’s administration.

In the 2012 electoral process, AMISOM troops were involved in the electoral process and supported the inclusion of “warlords” in parliament, arguing that their exclusion would destabilize the country further. This split the unified International Community position at the time.

AMISOM has also differed from the rest of the international community on significant issues such as the formation of Jubaland and the arrest and subsequent detention of Mukhtar Robow, a former Al-Shabaab leader, who was detained by authorities, has expressed interest in running for president of South West State.

According to insiders familiar with the mission, the Head of Mission presides over a dysfunctional mission, a huge military component that takes commands from their own capitals, a police component that is semi functional and a toxic civilian component made up of AU civil servants with individual backing from Addis or other AU member states. Since the civilian and police components moved to Mogadishu, the fractures have became more evident.

Madeira has survived the longest because he has endured and taken the battles head on. Most other SRCC’s did not tackle all the challenges, rather took on one at a time. He managed to eliminate opposition within the mission and take on the UN. His Achilles heel was his close relationship with sections of the Federal Government.

What newsmakers are saying

The expulsion of the envoy has been received well by members of the opposition, most of whom accused Madeira of having conflict of interest in the country. They insist he has been working closely with members of the federal government at the expense of critics.

Omar Sharmarke, the former Prime Minister, termed the audio a “gross violation” of AU’s neutrality, adding that “Ambassador Madeira’s early exit will serve to protect the credibility and the image of ATMIS. This must also prompt the AU to appoint a leadership that acts with extra caution in its relations with Somalia’s current political situation.”

“Ambassador Madeira has crossed the line. He came out to confirm the doubts the opposition had of him that he was working for personal interests. That’s why he has been in the country for 7 years, under the protection of Farmaajo. He has expelled himself with his own words,” adds Abdishakur Warsame.

Madeira has vast experience in Counter Terrorism and has served as the AU Special Representative for Counter-Terrorism Cooperation and Director of the Algiers-based African Centre for the Study and Research on Terrorism [ACSRT], a post he held concurrently with that of Special Envoy for the issue of the Lord’s Resistance Army [LRA], from November 2011 to July 2014.

A Mozambican national, Ambassador Madeira began his career when he joined the Mozambique Diplomatic service in 1975. Madeira has served as Ambassador of Mozambique to several African countries, and diplomatic advisor at the presidency.

He was also a member of the Government delegation to the peace negotiations with RENAMO, which resulted in the signing of the August 1992 Rome General Peace Agreement for Mozambique.

Al-Shabaab: Spy agency is wrong, we have no plan to attack President Farmaajo, PM Roble