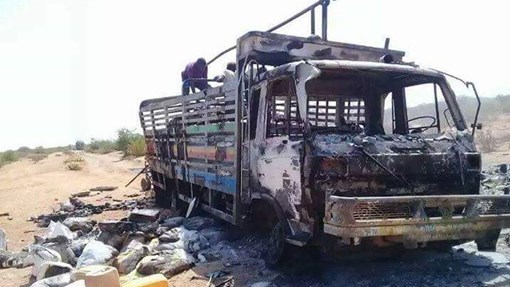 BELEDWEYNE, Somalia – In yet another horrifying attack, Al-Shabaab militants unleashed on food trucks on Friday night within the Hiraan region of Somalia, state media reports, leaving at least 17 civilians dead, as the group heightened violence in the Horn of Africa nation.

Further reports indicate that at least five people who were responding to the Al-Shabaab attack died after their car was hit by a landmine near the Afar-Irdod area, a few miles from where the militants killed the 17 civilians.

The five were rushing to pick up some of the victims of the attack. The death toll becomes now 22 people.

State media reported that the attack happened in the interior villages within the Hiraan region where the Somali National Army and allies have been executing operations against the militants, who control huge swathes of rural central and southern Somalia.

During the attack, witnesses said, locals who got wind tried to rescue but were in return hit by landmines, an indication that the militants were determined to make the attack successful. Due to limited public transport in the region, locals usually prefer food aid trucks which are at times not accompanied by security personnel.

The ruthless terror- a group of Alshabab killed last night at least 10 people and burnt 7 trucks that were carrying food and other commercial goods to Mahas district of Hiiraan region local people reported,” state media reported, but the number of casualties has since increased.

Saturday’s early morning attack is the worst since the raid at Hayaat Hotel within Mogadishu which left over 21 people dead last month. The militants have heightened attacks mostly targeting innocent civilians, security forces and at times senior government officials.

After the Hayat Hotel attack last month, President Hassan Sheikh Mohamud had pledged more operations against the Al-Shabaab but the group in return seems to be gaining ground, having upscaled operations against government forces across the federal republic of Somalia.

In recent weeks, however, the government troops have made major gains within the Hiran region where they managed to liberate a number of villages. On Thursday, the government of the United States lauded the troops, noting that “we will not allow the militants to triumph anywhere in Somalia”.

Aid trucks have been a major target by the militants who are keen to suffocate locals from getting humanitarian assistance besides pushing to make them submissive. The group has vowed to fight the government of Hassan Sheikh Mohamud, who took over from Mohamed Abdullahi Farmajo in June.

The Al-Shabaab militants are keen to expand territories given their recent incursion in Ethiopia, which was, however, repulsed by security forces. The group also has a huge presence in northeastern Kenya, where it has been saving deadly attacks targeting non-locals.