This was his first major visit outside the country in as many months according to available government documents. 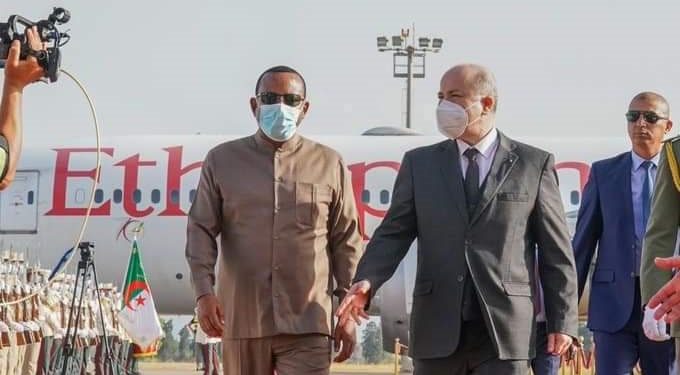 ADDIS ABABA – Ethiopia’s Prime Minister Abiy Ahmed on Sunday arrived in Algiers, the capital of northern African military giant Algeria, amid ongoing military operations within his country, which has witnessed hostilities for the last 22 months, especially within the Tigray region.

In response, the TPLF which is at loggerheads with the national army has launched a wave of attacks within Amhara and Afar states whose army is accused of collaborating with the national forces in the war against the Tigray militia. The team has seized two major strategic towns in Amhara.

Security analyst Rashid Abdi believes Abiy Ahmed’s trip was informed by Algeria’s military prowess and could be asking for immediate assistance. The PM has overseen a chaotic administration in Ethiopia, the worst in as many years.

“Ethiopian PM Abiy Ahmed in Algiers to ask for military help. A week of intense fighting has exposed the great weakness of his army and inability to beat the TDF,” claimed Abdi, one of the renowned security analysts on the Horn of Africa affairs.

“Algeria ranked 2nd biggest military power in Africa. Has an indigenous defense industry. Buys bulk of its hardware. It will be interesting to see how Turkey and the UAE respond to Addis Ababa’s flagging military campaign.”

But according to the state media, Abiy Ahmed arrived in Algiers in the company of First Lady Zinash Tayachew, together with a Ministerial delegation for a “working visit. This was his first major visit outside the country in as many months according to available government documents.

State affiliate Fana noted that Prime Minister Abiy and his delegation were accorded a warm welcome by Aymen Benabderrahmane, Prime Minister of Algeria upon their arrival at Algiers. The northern African nation witnessed the Arab revolution almost a decade ago.

During his stay in Algeria, the state affiliate Fana further reported, that Prime Minister Abiy Ahmed will discuss with the President of Algeria, Abdelmadjid Tebboune bilateral issues of mutual concern and visit various development projects in the country.