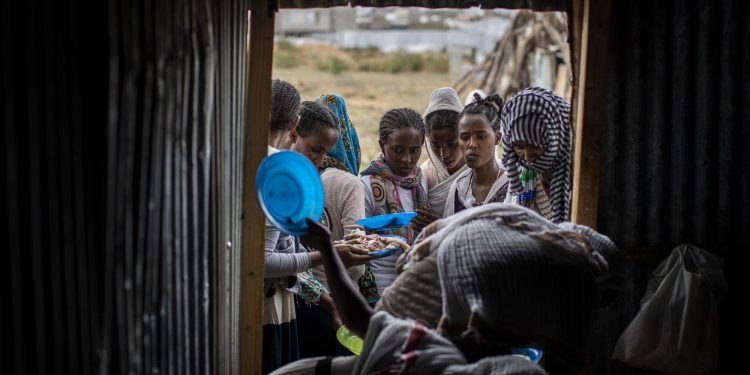 Thousands of Tigrayans are facing imminent hunger after several World Food Programme [WFP] trucks got blocked at Afar region, in what could trigger fresh fighting in northern Ethiopia, reports indicate.

According to reports from Tigray, the trucks were blocked by Afar troops, who have been fighting alongside the Ethiopia National Defense Forces [ENDF]. About two months ago. Tigray Defense Forces [TDF] quit from several towns in Afar and Amhara regions.

For 13 months, thousands of people have been subjected to unprecedented hunger in Tigray following a conflict between TDF and the Ethiopia National Defense Forces [ENDF] which was triggered by the delay of elections and an attack on Northern Command.

Getachew Reda, the official spokesperson of TDF, said a 27-trucks convoy was blocked by Afar troops under unclear circumstances despite official clearance by authorities in Addis Ababa, the Ethiopia capital.

“A 27-trucks WFP Convoy apparently left Semera on its way to Tigray. The convoy was expected to break the logjam on humanitarian access to Tigray or so we were told. It turned out, while the Government in Addis had ostensibly given the green light, the regional government of Afar thought the better of it,” he claimed.

“The excuse given was that the regional government didn’t approve of the convoy; and there was fighting in Abaala, Afar. The most farcical part of the story is that the so-called Abaala conflict was launched by the Afar forces and their Eritrean partners a few days ago and still continues,” he added.

The Eritrean troops have been linked to the assaults within the Tigray region despite efforts by the international community to tame them from engineering genocide. The troops made a return in December 2021 days after the TDF deserted most parts of the Afar and Amhara regions.

Tigray authorities now say there is a need to allow the World Food Programme [WFP] trucks to access the region, noting that thousands of people could die should the situation within northern Ethiopia persist.

However, both Afar regional administration and authorities in Addis Ababa have remained mum about the latest showdown despite the reports that the WFP trucks were cleared by the federal government of Ethiopia.

On Wednesday, Ethiopia’s Prime Minister Abiy Ahmed lifted the six-month State of Emergency ahead of its expiration amid a blockade on all humanitarian assistance to its northern region of Tigray. The international community had raised issues about the blockade.

Conditions under the blockade had become so dire that ICRC in a statement this week said some doctors in Tigray are now using salt to clean wounds, handing out expired medications, and reusing single-use items such as chest drains and gloves.