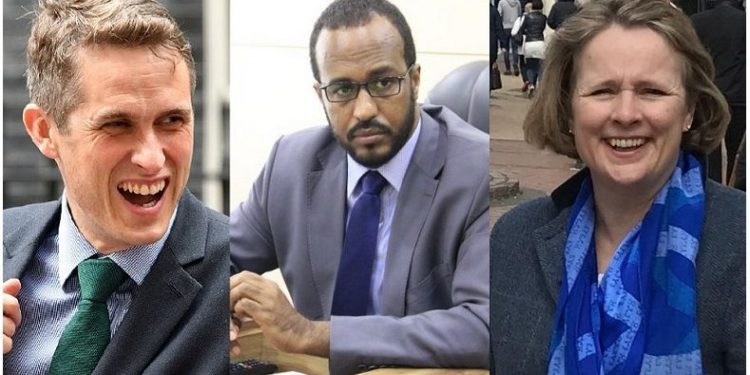 The Conservative MP was fired sometimes back from the government when serving as a minister over claims that he had leaked national security information.

MOGADISHU, Somalia – A war of words emerged on Wednesday between a senior minister of the Federal Government of Somalia and a Member of Parliament from Britain over recognition of Somaliland debate which dominated the UK House of Commons on Tuesday.

Ambassador Gamal M Hassan, the current minister of Economic Planning and development in Somalia seemingly differed with South Staffordshire MP Gavin Williamson, who has been pushing for recognition of Somaliland.

On Tuesday, Williamson tabled a motion in UK parliament on recognition of Somaliland as an independent state but that motion would be adjourned by the House Speaker and members following wide consultation.

But on Wednesday, Gamal, who previously served as Somalia's ambassador to Kenya, blasted the UK MP over his persistent push to have Somaliland put on the global map as an independent nation.

In his tweet, Gamal accused Williamson of lacking facts, while revisiting the MP's controversial past. The Conservative MP was fired sometimes back from the government when serving as a minister over claims that he had leaked national security information.

“No, this actually shows your complete ignorance of the situation on the ground. Someone disgracefully fired from his own gov’t for leaking national security info has no business meddling in the internal affairs of a sovereign nation. Supporting secession only adds insult to injury,” he said.

Earlier, Williamson had sharply differed with Vicky Ford, over the recognition of Somaliland. In his tweet, Williamson said Mrs. Ford, the UK minister for Africa, Latin America, and the Caribbean of lacking knowledge about the reality of Somaliland's feud with Somalia.

“This shows a complete lack of understanding of the political reality on the ground. It's important for junior ministers to listen to Parliament as it is the role of Parliament to have a say on policy. Yesterday showed there is a broad consensus for UK government to recognize Somaliland,” he noted

Mrs. Ford had insisted that for Somaliland to be recognized as an independent nation, Hargeisa must engage Mogadishu for a lasting solution. She insisted that only dialogue between the two entities would solve the standoff.

On previous occasions, there have been attempts to reconcile the two but Somaliland insists on statehood. On Tuesday, the region's President Muse Bihi Abdi visited Ethiopia where he's set to have bilateral ties with embattled Prime Minister Abiy Ahmed.