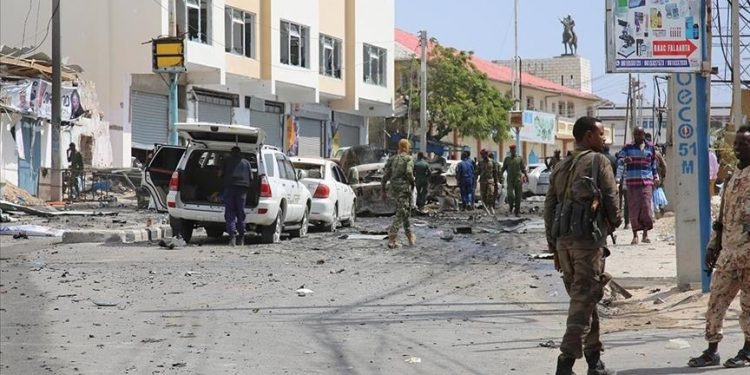 According to police reports

Tuesday's attack was the fourth in as many weeks, with another explosion reported in downtown Mogadishu on the same day. Last week, at least eight people were killed in a similar attack within the capital.

Reports indicate that a suicide bomber targeted an army training center but ended up striking a tea shop within the vicinity of the facility. Al-Shabaab said they targeted Turkish-trained GorGor troops.

According to police reports, a bomber walked into the tea shop, pretended to be a customer, and sat for tea. Moments later, the bomber blew up.

Major Abdifatah Aden, who is the police spokesman, said the bomber deliberately targeted the tea shop customers. Fourteen people were injured in the explosion, and four of them succumbed to their injuries after being evacuated from the scene.

The al-Shabab militant group immediately claimed responsibility for Tuesday's attack, saying at least 20 Turkish-trained soldiers were killed. The explosion did heavy damage to the tea shop, which was made of corrugated sheet metal.

About two hours later, a second explosion occurred about two hours after the first, in a nearby Dharkenlay district, police reported. The latter attack was from a device attached to a vehicle belonging to a private company, and no casualties were reported, police said.

Government spokesperson Mohamed Ibrahim Moalimuu was injured on Sunday following a similar explosion. The spokesperson has since been airlifted to Turkey for specialized treatment.