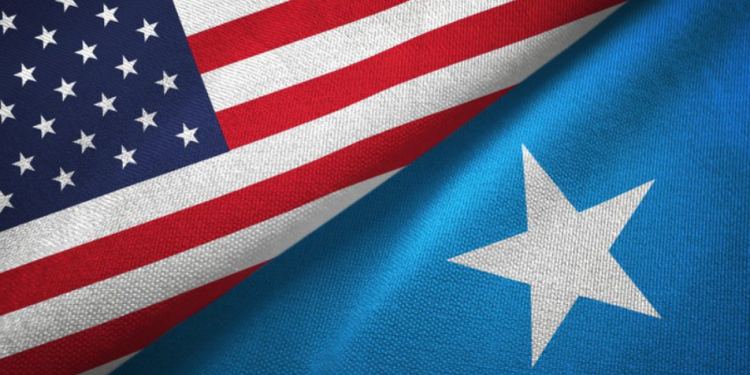 𝐌𝐎𝐆𝐀𝐃𝐈𝐒𝐇𝐔, 𝐒𝐨𝐦𝐚𝐥𝐢𝐚 | US Ambassador Larry André says the trip by Somaliland leader Muse Bihi to Washington this week will not affect his country’s stand on Somalia.

Mr. Bihi, leader of the self-declared independent region, but which no other sovereign state recognises, is touring Washington this week as part of an invitation to give a keynote address to the Heritage Foundation.

But Mr André told Garowe Online in an interview that while Washington respects achievements by the breakaway region, it treats Somaliland just as any other federal state in Somalia.

No. Muse Bihi, President of the Somaliland region of Somalia, is visiting Washington DC at his initiative. He will be met by Ms Molly Phee, our Assistant Secretary for African Affairs, the top United States diplomat for Africa. We respect the achievements of the Somaliland region in terms of democratic governance, economic development, and security. We work on shared goals with Somaliland’s authorities just as we do with Somalia’s Federal Member States.

Garowe Online has received reports that [Somaliland ministers] Mohamad Kaahin and Saleebaan Koore were denied Visas to enter the United States due to the deportation of Somali citizens from Bay and Bakool from Laas-anood last year. They were both granted visas later. What happened?

Under our law, an individual’s visa record status cannot be shared publicly.

You were formerly US Ambassador to Djibouti. Djibouti held the Arta Conference and the first post-civil war Somali Elections, emphasising Somali Unity. What is the United States’ view on Somali Unity?

The United States recognizes the sovereignty and territorial integrity of the Federal Republic of Somalia https://www.state.gov/u-s-relations-with-somalia/ in its historic borders, which include the Somaliland region. We view the question of Somaliland’s status as an issue for the people of Somalia (including Somaliland) to determine. As Ambassador to Djibouti, I was invited to attend as an observer the June 2020 talks in Djibouti between delegations from Hargeisa and Mogadishu. I recall that both parties agreed to work together to promote the interests of all Somalis within the territory of historic Somalia, thereby increasing mutual confidence and promoting reconciliation and an eventual agreement on status.