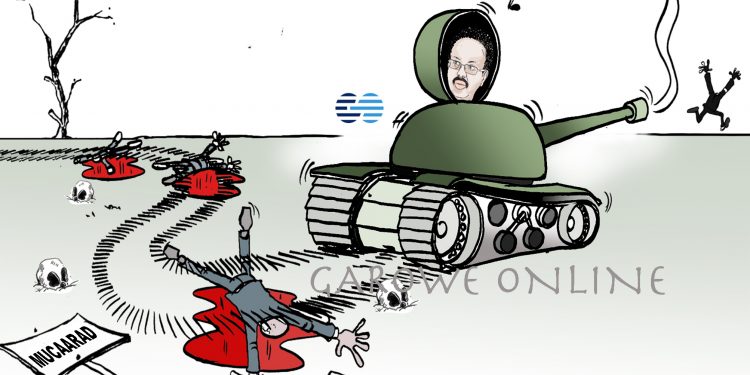 𝐄𝐃𝐈𝐓𝐎𝐑𝐈𝐀𝐋- Just when we thought the end of bad times was nigh, agents of Mohamed Farmaajo’s administration have struck again; sending threats to those they disagree with.

Hours after Dr. Hodan Ali completed her Twitter Spaces debate on Somali politics, some narrow-minded folks sent her death threats, calling for her to be ‘tamed’ or put in her place.

Dr. Ali, one of the brightest minds to have emerged from Somalia, is a practicing nurse by day and a political commentator by night. She was Senior Advisor Mayor of Mogadishu and Governor of Benadir Regional Administration, Abdirahman Omar Osman ‘Yarisow’. In 2019, Eng Yarisow was felled by a Shabaab suicide explosion. Hodan survived simply because the explosion went off as she was across the road at a coffee shop. So these threats may easily have aroused the horrors of 2019. Except the culprits sounded like government operatives.

Dr. Ali is famous for being vocal against the misdeeds of Farmaajo, including political intolerance and delays in implementing crucial elections and was being targeted for her stance. But we think it is not just her the thugs want to eliminate. Under Farmaajo’s tenure, this has been the pattern, and the culture of impunity has been supreme since 2017.

Critical individuals have been raided, killed, disappeared, or hassled out of the country. On bad days, some have been denied even an opportunity to travel across the country to conduct businesses or join their families.

When Dr. Ali was threatened on Friday, neither Farmaajo nor his lieutenants commented, distanced, nor promised to investigate. This, too, fits the pattern. Since 2017, people who stood up against the regime have been dragged through offensive threats. Some kept quiet; others didn’t. Usually, the federal government moves on. Picture the case of Abdirahman Abdishakur, the former Planning Minister whose Wadajir Party offices were raided and guards killed in 2017. At the time, no one was arrested, and the case was never dealt with. Abdirahman was never assured of safety. Instead, the government agents continued to pound him for critical of Farmaajo’s missteps. We remember how a cleric, a convict of terrorism, was even allowed to declare a fatwa on him. For Farmaajo, even criminals are good tools against opponents, regardless of the law.

Then there was the famous case of Ikran Farah, the spy agent who vanished last year in June under mysterious circumstances. The federal government later claimed al-Shabaab had killed her. But neither the whereabouts of the body nor the narrative on how she ended up in Shabaab hands has never been given.

Weaponising political differences may not be a new tool. But a country that needs national unity and leaders with a vision to get out of its ashes of war must do whatever it takes to avoid electing leaders who normalize violence.

This is why we need elections, essentially to remove the impunity that has reigned in this country. Unfortunately, the current regime has taken advantage of our fragile minds. We hope this will be the last election when people look to choosing new leaders while worrying about safety from insecurity caused by their leaders.