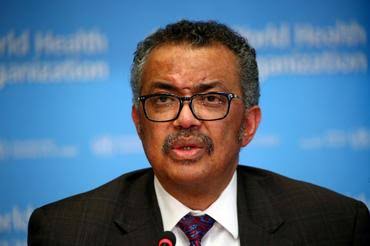 The situation in the Tigray region of Ethiopia remains “dire” and “catastrophic,” World Health Organization [WHO] Director-General Dr. Tedros Adhanom has said, adding that only a few trucks carrying humanitarian aid have been allowed to access the region.

For about 17 months, the Tigray region has been locked from the rest of the world after the Ethiopian National Defense Forces [ENDF], Eritrean troops, and the Amhara regional troops invaded the region trigging a massive conflict with Tigray Defense Forces [TDF].

According to Dr. Tedros Adhanom, who also hails from Ethiopia, despite the truce reached about three weeks ago, only 69 humanitarian trucks have accessed the region, amounting to only 4 percent of the assistance to the area.

The WHO boss added that the situation remains dire in the region, noting that thousands of people die of hunger. He did not give an exact number of people who may have died from starvation but insisted the siege in the region remains “real.”

“Eritrea invaded Tigray in November 2020 and with Ethiopian forces sealed off 7 million people from the world,” he said. “A  truce was called 3+ weeks ago, but only 69 humanitarian trucks, 4% of the needs, have been allowed in. The situation is dire. People are dying; the siege must end for real.”

The Ethiopian government, under the leadership of Abiy Ahmed, insisted that the access to the region remains unconditional, adding that the troops have been assisting the teams in accessing the region with ease, contrary to speculations that the blockade remains real.

Last week, the United States thanked the Ethiopian government for allowing several trucks carrying food to access the Tigray region but reiterated that the access should remain unconditional. The US also called for the resumption of basic services, including electricity and banking.

“We reiterate the importance of significant, sustained, unconditional, and unhindered humanitarian access to Tigray—as well as to all communities that are suffering, including the people in Afar —and the urgency of the resumption of basic services, including electricity, telecommunications, and banking,” read the statement.

“The  continued commitment of the government of Ethiopia and Tigrayan authorities to a cessation of hostilities remains a critical step toward reconciliation and peace,” the US said,  “In  that regard, we welcome the withdrawal of Tigrayan forces from Erebti and underscore the importance of further withdrawals from Afar regional state.”

Further, Washington asked Addis Ababa and Mekelle authorities to continue engaging each other, noting the need for a sustainable truce in the country. The US has been pushing for structured negotiations between the two parties, wrangling over leadership.

“The parties must continue to build on this progress to advance a negotiated and sustainable end of the conflict. Progress toward this goal is an essential foundation for restoring essential services in Tigray and an inclusive political process to provide security and prosperity for all Ethiopians,” the US further said.

Abiy Ahmed had struggled to contain the situation in the country despite starting on the right track when he managed to end the standoff between Ethiopia and Eritrea. In 2019, he was announced the Nobel Peace Prize winner, but since the war broke out in Ethiopia, critics argue that he didn’t deserve such accolades.