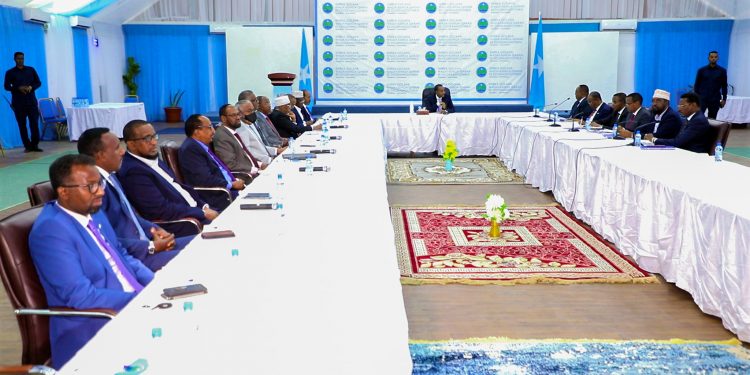 Members of the opposition led by former Presidents Sharif Sheikh Ahmed and Hassan Sheikh Mohamud have been pushing for the resignation of Farmaajo.

 Somalia: The NCC meeting concludes in Mogadishu, most issues solved

MOGADISHU, Somalia – The National Consultative Council [NCC] meeting was concluded in Mogadishu, the Somali capital on Sunday afternoon with decisions pertaining to elections in the country have been solved.

The leaders have agreed to complete the Lower House election by February 25.

Prime Minister Mohamed Hussein Roble was the main convener of the meeting which brought together all five Federal Member States leaders and the Mayor of Mogadishu Omar Filish, who is also a key stakeholder in the electoral exercise within Somalia.

Before the end of the meeting, the PM and the Federal States leaders held a meeting with the opposition presidential candidates, members of the International Community, the Civil society groups, and other teams on Sunday morning to share notes and give immediate recommendations before the issuance of the communique shortly.

Roble had sanctioned the meeting following complaints from members of the opposition who accused outgoing President Mohamed Abdullahi Farmaajo of stage-managing elections in favor of his lieutenants in various Lower House polls.

The international community had called for tolerance from both parties, adding that the differences should be solved immediately to bring to an end the staggering exercise. The team further warned that it will take stern actions against those derailing the exercise.

While most issues have been resolved, there are claims that federal leaders Ali Gudlawe [Hirshabelle], Abdiaziz Lafta-Gareen [Southwest], and Ahmed Kariye alias Qoorqoor [Galmadug] were against the resolution to have PM Roble taking security responsibilities.

The three leaders are close allies of outgoing President Mohamed Abdullahi Farmaajo. On the other hand, Said Abdullahi Deni [Puntland] and Ahmed Islam Mohamed Madobe of Jubaland have strongly backed the PM, arguing that Farmaajo should distance himself from the exercise.

Members of the opposition led by former Presidents Sharif Sheikh Ahmed and Hassan Sheikh Mohamud have been pushing for the resignation of Farmaajo, arguing that he should quit and face them as a candidate in the upcoming elections.

Further, as the nation eagerly anticipates the outcome of the NCC meeting, The Villa Somalia is initiating a contingency plan which is to fan the current political flames and take actions similar to Dec 27 coup attempt if the NCC meeting produces results contrary to their expectations.

Former House Speaker, Prof Mohamed Jawari on Saturday spoke on the security responsibility issues which is deterring the NCC meeting to succeed. Jawari argued that as per the constitution the cabinet has the sacred mandate to deal with security issues.

Jawari also added that the cabinet has the legal power to appoint and sack chiefs of armed forces. A constitutional lawyer and decades of experience in law and governance, Prof Jawari was recently blocked from running for an LH seat from Southwest due to differences with Lafta-Gareen.