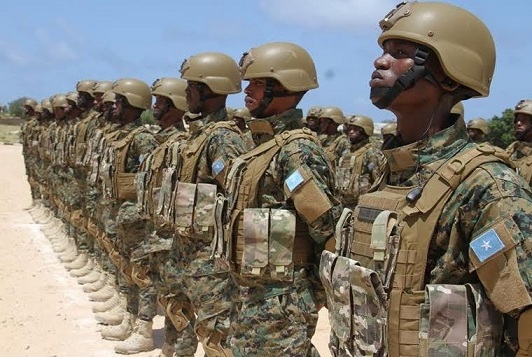 The Somali National Army [SNA] has announced significant success in an operation carried out on Sunday, which saw Al-Shabaab militants lose ground in the latest offensive to neutralize the group.

Guriel town has been a significant hotspot for clashes between the Somali National Army and the Al-Shabaab militants, with the town often being liberated by the national army. Guriel is considered strategic in the fight against the militants.

Odawa Yusuf Rage, commander of SNA, told SNA Radio Mogadishu that the militants’ commander in charge of Guriel and El-bur town in the region were among those killed there. He termed the incident as ” a success.”

“We killed six al-Shabab terrorists and foiled a car filled with explosives in which they wanted to detonate at SNA base in Guriel overnight,” Rage said, adding that the militants are slowly losing ground.

The seasoned army boss added that the elite soldiers recovered weapons and a vehicle during the operation, noting that the army will remain vigilant and are committed to counter-terrorists. Al-Shabab militants did not comment on the latest onslaught by the government forces.

The success comes after it emerged that the federal government of Somalia and the African Union had reached an agreement that would pave the way for a reconfigured force in Somalia, with the United Nations being the primary sponsor.