The report suggests that the child soldiers were killed between January 2020 and May 2021 as the Iranian-backed rebels continue to hold camps and courses encouraging youngsters to fight. 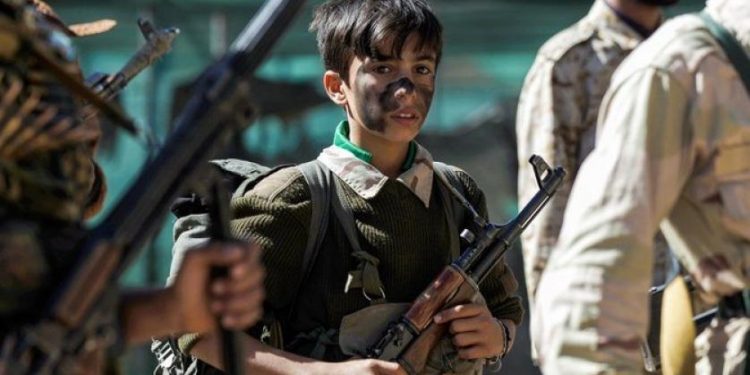 A report published by the United Nations’ panel of experts suggests that over 2000 child soldiers recruited by the Houthi rebels have died on separate occasions at the battlefield, the worst record should the report get confirmed.

The report suggests that the child soldiers were killed between January 2020 and May 2021 as the Iranian-backed rebels continue to hold camps and courses encouraging youngsters to fight.

Experts said they carried out investigations in schools and mosques where the rebels recruited child soldiers to fight the Saudi-backed Yemen government, which has struggled to stabilize.

“The children are instructed to shout the Houthi slogan `death to America, death to Israel, curse the Jews, victory to Islam,’” the four-member panel of experts said. “In one camp, children as young as seven years of age were taught to clean weapons and evade rockets.”

The experts documented about 10 cases where training and sexual violence dominated. Nine of the cases on where humanitarian aid was given were solely based on whether their children participated in the fighting.

“They were aged between 10 and 17 years old,” the experts said, and “a significant number” of them were killed in Amran, Dhamar, Hajjah, Hodeida, Ibb, Saada, and Sanaa.

Yemen has been engulfed in civil war since 2014 when the Houthis took Sanaa, the capital, and much of the northern part of the country, forcing the government to flee to the south, then to Saudi Arabia.

A Saudi-led coalition that included the United Arab Emirates and was backed at the time by the United States entered the war months later, in 2015, seeking to restore the government to power.

The conflict has since become a regional proxy war that has killed tens of thousands of civilians and fighters. The war has also created the world’s worst humanitarian crisis, leaving millions suffering from food and medical care shortages and pushing the country to the brink of famine.

In recent weeks, shifting front lines on the ground have resulted in escalating attacks following gains by UAE-backed forces in the contested province of Marib, which the Houthis have been trying to take for more than a year. Coalition airstrikes followed two Houthi attacks inside the UAE using missiles and drones, killing three in strikes near the Abu Dhabi international airport.

The panel of experts said the Houthis have continued their aerial and maritime attacks on Saudi Arabia, with targets close to the border most at risk and usually attacked several times a week with a combination of unmanned drones and short-range artillery rockets.

But the rebels also continue to strike deep inside Saudi Arabia less frequently using longer-range drones as well as cruise and ballistic missiles, they said.

In the Red Sea, the experts said, waterborne improvised explosive devices were used to attack commercial vessels at anchor in Saudi ports, in some cases more than 1,000 kilometers from Yemeni shores.

“It appears almost certain that those devices were launched from a `mothership,’ which would have towed the devices for most of the journey,” they said.“The purpose of these attacks was primarily political, i.e., the Houthis want to push Riyadh towards accepting a political settlement beneficial to them,” the experts said.

“This contrasts sharply with the use of missiles and un-crewed aerial vehicles within Yemen, the aim of which is often to attain maximum lethality.”

The 303-page report said violations of international humanitarian and human rights law are “the norm rather than the exception” in the Yemen conflict, citing arbitrary arrests and detentions, enforced disappearances, torture, and ill-treatment “committed by all parties.”

British Ambassador to Somalia, Kate Foster, added: "The situation is extremely worrying, with millions of people in desperate need of life-saving food and clean water.