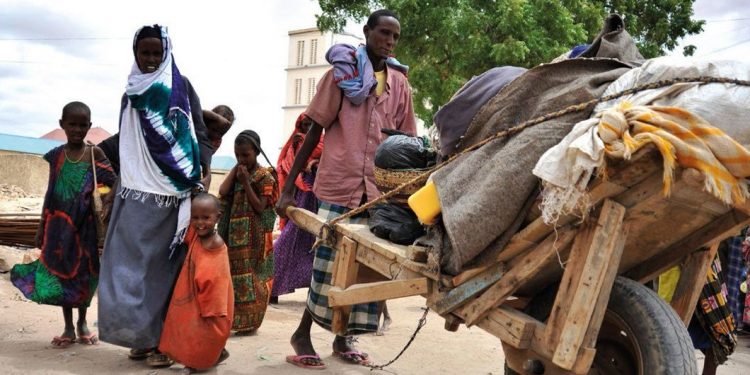  Thousands flee to Mogadishu as drought rages on in Somalia

MOGADISHU, Somalia – Somali capital Mogadishu has become the home to thousands of people fleeing several parts of the country following an unprecedented drought which has resulted in extreme hunger within the country.

Already, hundreds of internally displaced people have erected makeshift shelters in the outskirts of the capital despite the raging Covid-19 pandemic in Somalia. Sanitisation has been compromised too due to the influx of people to Mogadishu.

Muhubo Adam, a 45-year-old mother of four living in Najah camp, told the Voice of America [VoA] that she was forced to travel from Lower Shabelle due to a raging drought in Somalia. Already, she added, her family has lost livestock due to drought.

But conditions in the crowded camp are also difficult. Despite the coronavirus pandemic, nobody is wearing a mask, there is no room to socially distance, and sanitation is poor.

Nur Ali, an emaciated 56-year-old man also told VOA that he was forced to move out of his home due to drought. According to him, despite the family fleeing from their village to Mogadishu, things are not any better.

Ali said his livestock began to die because of the long drought, so he had to run away with his children and finally reached the camp. But nowhere, he said, they don’t have anything, and his children are hungry and don’t have any food. Ali said that he is also sick.

Faisal Omar, who was put by authorities to be in charge of the Najah camp, said currently 350 people have registered with authorities following hunger in their respective homes across Somalia. For now, she added, they are depending on well-wishers.

Early this week, the United Kingdom approved $10 million towards the mitigation of drought in Somalia. Already, the country has declared an emergency but political intrigues have made it impossible for aid agencies to effectively reach out to affected people.

The World Food Programme [WFP] asked well-wishers to chip in and help affected people, adding that thousands could die if no assistance is given in time. The United Nations has been struggling to assist affected families.

Mogadishu has also been witnessing terror attacks in recent days with at least 15 people perishing within the last one week following separate Al-Shabaab attacks. There are fears that the group might target IDPs taking refuge in the capital.