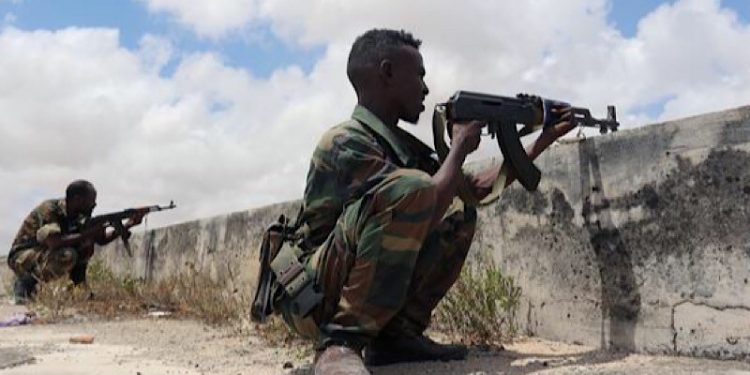 For the second time in as many months, the federal republic of Somalia has vehemently denied claims that her Armed Forces participated in the Tigray massacre, which left thousands of people dead.
A report published by Canada-based Globe and Mail established that Somali soldiers training in Eritrea at some point crossed over to Ethiopia where they assisted the Ethiopian National Defense Forces [ENDF] in pursuing Tigray Defense Forces [TDF].
The TDF and ENDF have been at loggerheads for the last 13 months, in a war that caught the world unaware. Efforts to reconcile the two parties have largely been futile, despite frequent calls for dialogue and reconciliation.
In a statement published by Abdirashid Mohamed Hashi, the Director of Communications in Villa Somalia, the president now wants the Globe and Mail to immediately apologize or risk legal actions.
Villa Somalia insists the Somali National Army did not take part in the atrocities, arguing that there is no credible evidence to implicate Somalia over massive human rights violations. It further termed the allegations as “false and unsubstantiated”.
“The article makes false, unsubstantiated, and damaging claims about the Somali National Army which the government confirms was never deployed to Ethiopia in any capacity.  There is no credible evidence of Somali soldier’s involvement in Ethiopian conflict,” read the statement.
Presidency further insisted Somalia is on the right course to democratization, arguing that by the fact Somalia is a member of the UN Human Rights Council, it has never intended to engage in such activities, especially in a foreign land.
It castigated the Globe and Mail while calling for genuine reporting on serious matters especially something to do with war. It asked the Editorial team to review its standards to avoid future embarrassments.
“Somalia is on a steady road towards returning to stability through democracy and impactful social-economic reforms. The country is a proud member of UN Human Rights Council and the government is committed to promoting human rights both at home and abroad,” it noted.
“Due to these facts, the media should report accurately. It is clear the Globe and Mail have fallen short of this standard and its own editorial guidelines and values,” Abdirashid Mohamed Hashi further said.
The report by Globe and Mail comes just a few months after the United Nations Special Rapporteur to Eritrea noted that Somali troops training in Asmara were sighted in the Tigray region. Both Ethiopia and Somalia denied the reports.
Fighting in Ethiopia has left thousands of people dead with ENDF often calling for reinforcement from Amhara regional forces and Eritrea soldiers. It’s just the beginning of the year Ethiopia Air Force was accused of using Turkish-made drones in the Tigray region.
GAROWE ONLINE
Tags: EritreasomaliaTigrayVilla Somalia