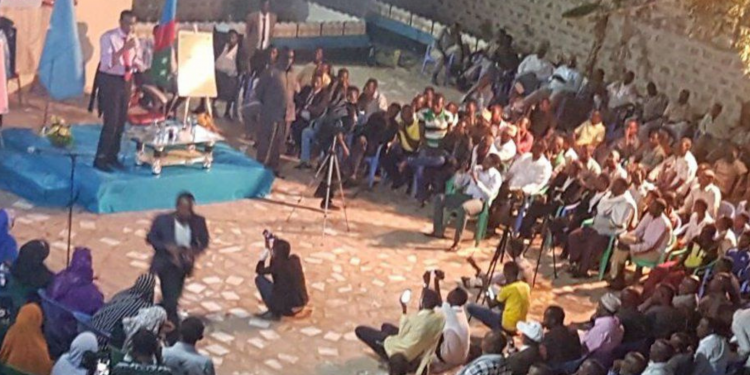 On the 13th of March 2022, Garowe Online hosted one of its series Twitter Space discussions which usually focus on the current trends and news from East Africa, particularly Somalia. In this session, we were enlightened to have Jabril Abdulle, who is currently contesting for the president of Somalia. Abdulle is a renowned advocate for reconciliation, peacebuilding, and good governance, and he possesses decades of experts in this field. As Somalia is set to conclude the most protracted federal parliamentary elections, Abdulle deliberated on ‘Somalia Post-Election: Reconciliation and Institution Building.’

Despite numerous international and domestic supports for Somali Statebuilding processes, much of the country remains a theatre of conflicts and widespread insecurity. There appears to be a significant increase in Al Shabab’s ability to carry out lethal attacks. They control vast swaths of land, particularly in central and southern Somalia. It is not that there are no national or international security forces to counter the threat posed by Al Shabab, but that the current outgoing government lacked a plan and a political vision to stabilize the country.

“The Three successive Somali governments inherited Maka Al Mukarama Road in Mogadishu from one another, and sadly it remains the only road for government officials to travel. No government minister or junior director of government institutions would dare to visit Bakara Market, which is only three kilometers away from Villa Somalia.”Said Jabril Abdulle

Despite widespread insecurity across the country, Somali political leaders have avoided compromise and consensus, prioritizing personal gain over the common good. While the general public appears willing to put aside their social and political differences in peace and stability, our leaders have gripped heedlessly to the logic of “me, myself and my clan.” This mindset has exacerbated widespread popular skepticism of government institutions and their leaders.

During opening remarks, Presidential Candidate Jabril Abdulle stated, “Our country, Somalia, is facing a transformation and at a crossroads. The challenges facing the Somali people are too many to count: political instability, continued insecurity, devastating drought affecting millions of people, widespread unemployment, entrenched political elites, increased activities of transnational terror groups, and a profound public mistrust of political institutions and leadership borne of experience.”

A deeply tainted electoral process had further exacerbated social and political divisions, making the situation even more volatile. As a result, Al Shabab and other radical groups are taking advantage of it.

“It is essential to underline that the elections in Somalia in 2022 may be the country’s last real chance to recover from over three decades of protracted conflict and a lifetime without democracy.“ said Jabril Abdulle highlighting the prolonged electoral process previously failed to meet several deadlines.

This country needs a leader who understands issues confronting the country’s political process and has devised a strategy and plans to restore peace and stability. Unfortunately, that person cannot be a person or a group that has already tested and failed in the country’s leadership and security.

To end this cycle of valance and political crisis, a vital need for an inclusive and consensus-based governance system. Jabril notes that the Somali people have been striving for complete and all-inclusive governance for the past thirty years, adding that he believes “progress has been made in some areas, our country has yet to achieve functional and accountable national government to which we aspired.”

“We’ve devised a two-pronged strategy. a) Managing, overcoming the political crisis and mistrust inherited from the now-defunct government; and 2) Accelerating the rebuilding of regional and federal institutions that have been stalled for the past two years. “ Presidential Candidate Jabril Abdulle states and promises to endeavor to implement reconciliation and confidence-building programs that will stabilize the country. “This will be done in collaboration with the country’s political stakeholders and the Somali people.” Jabril Abdulle adds.

Since the coup in 1969 when the Siad Bare regime took over the government, Somalia has been struggling to bring together its political elites with opposing ideologies. During Garowe Online Twitter Space discussion, Presidential Candidate Jabril Abdulle promised in his first two hundred days that he would initiate a reconciliation program called ‘XAL-DOON’ which means ‘SEEKING SOLUTIONS”. Its goal is to find a long-term solution to the complexities left behind by successive Somalia administrations, particularly in the last five years. Successful negotiation in the transitional period will be critical to the long-term viability of the new government and, by extension, the state-building process of Somalia.

“The Xal-Doon Program will foster unity and reconciliation among stakeholders and political stakeholders. The Federal Member States, as well as their leaders, will play an important role in this program.” Jabril Abdulle notes.

To establish functioning and adequate federal and state-level institutions, Jabril Abdulle highlights key vital steps including; Enhancing Security and Stability in the country, Reviving Somalia Judiciary and its infrastructure, Completing the Draft Constitution, Ending Clan-based Politics: Towards to 2026 election–one-person-one-vote.

Despite spending millions of US dollars, Somalia failed to establish efficient, equitable, and accessible justice systems. This issue is related to the lack of a solid constitution tasked to oversee and balance the judicial system. Lack of effective judicial and the rule of law are one of the most pressing problems confronting current Somalia on its path towards stability and reconstruction. Presidential Candidate Jabril Abdulle contends the importance of establishing an independent judicial system and the constitutional court that will be mandated to guard the country’s justice system. “As someone who has dedicated his entire life to peace and the protection of human rights, I will put policies that ensure equality and social justice for all. “ Presidential Candidate Jabril Abdulle pledges.

Much time and effort have gone into writing, compiling, and revising the country’s constitution since drafting it for eighteen years. Though its foundation is in place, one of the critical parts in finalizing it, which is the political agreement remains untouched. “Unfortunately, the outgoing government has made no effort or demonstrated any desire to complete the constitutional review process within its four-year mandated term.” Presidential Candidate jabril Abdulle argues.

There is widespread public sentiment towards ending clan-based politics and representation. 70% of Somalis and aged below 40, and none of them witnessed universal suffrage elections. Unfortunately, today’s leaders and politicians have a vested interest in tightening the 4.5 systems. “I genuinely believe that, as security is important for Somalis, so as a one-person, one-vote voting system. We should not go back to the divisive clan-based indirect elections. Never Again!” Presidential Candidate Jabril Abdulle notes in solid terms, pledging to deliver one-person-one-vote elections.

Insecurity is one of the most significant impediments to rebuilding Somalia’s government and institutions. This is a substantial source of concern not only for the Somali people but also for the international community and Somalia’s neighbors. “Despite the building national security forces, there is a lack of leadership and strategy to guide the security forces and the country’s overall security. We will review the National Security Policy, including strengthening existing institutions, consolidating SSA achievements. We intend to revisit the National Security architecture. With the assistance of current senior military officers, former and retired senior officers, and security experts, we will implement new security reform plans.” Jabril Abdulle says.

During the closing remarks, Presidential election Candidate Jabril Abdulle challenged fellow contestants for a presidential debate, one of its kind in Somalia, and nominated Garowe Online, given its history of independent editorial and pragmatic journalism, to host that debate in a bid to put the spotlight on the right candidate.