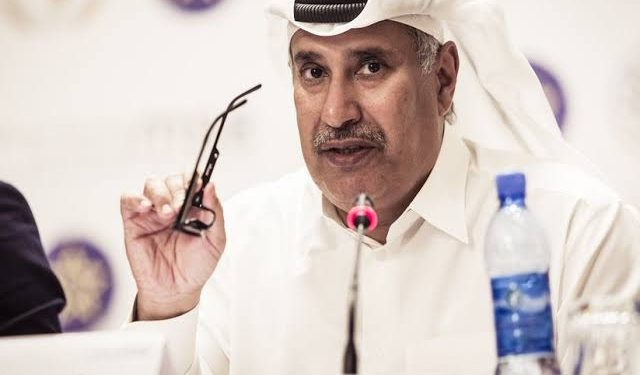 DOHA, Qatar – A former Qatar Prime Minister has made an unprecedented admission which implicates Doha of funding specific agents to sabotage peace and stability of foreign nations to the advantage of the Gulf nation.

In a staggering admission, Hamad bin Jassim alias HBJ noted that Qatar has been sponsoring many journalists for many years, some of who have gone ahead to serve as legislators in their countries while others now hold senior government positions.

These agents, he noted, are the face of Doha abroad and play crucial roles, such as spying on the countries in question. He stressed that Doha has for a long survived by using these undercover teams who directly share with the government of Qatar.

Though he doesn’t mention any names, it’s almost sure that Hamad bin Jassim has Fahad Yasin, a former National Intelligence Security Agency [NISA] boss in mind. Yasin, a close ally of outgoing President Mohamed Abdullahi Farmaajo, was sacked in October 2021 but immediately reinstated as a presidential advisor.

Last week, Yasin was elected in Hirshabelle as the representative of HOP86, but the results were temporarily suspended after elders complained of a lack of transparency. However, the electoral dispute resolution team has since said they reinstated him to serve in the 11th parliament.

According to a report published by The Reference, Fahad, for many years, has served as Qatar’s reliable bridge to Somalia’s Islamist movements. Since 2017, and as the Gulf rivalry heated up, Fahad successfully turned Somalia into a Qatari client state. In return, Doha financed and diverted the agency into its tool.

Many Federal Government of Somalia insiders went as far as to allege that under Fahad became a vassal of Qatar’s intelligence agency. The former journalist was often under fire from the opposition, which accused him of creating bad ties with the United Arab Emirates [UAE].

For example, In 2019, after The New York Times broke the story on how Qatar sponsored ISIS’ Somali franchise to execute terror attacks in Somalia, Fahad, who was at the time Somalia’s spy chief, forced Somalia’s Foreign Affairs Ministry to exonerate Qatar within 24-hours.

Fahad’s unrestrained chaos engineering was such that last year when the State Department identified him for sanctions, the CIA, most likely acting under the influence of Qatar, successfully shielded him. The result has been catastrophic for Somalia

The Qatari government plays a significant role in the political and military moves in Somalia by recruiting intelligence agents to spy on the Mogadishu government and monitor its movements so that it conforms to Doha’s provocative policy by recruiting agents within decision-making circles, reaching as high as the presidential palace, the Reference noted.

Starting in 2018, with the encouragement of regional allies and Qatari money and through Yasin, outgoing Somali President Mohamed Abdullahi Mohamed Farmaajo could legalize fraud in the elections to install loyalists.

In addition to bribery and favoritism, Farmaajo deployed the Federal Security Forces as tools of political control, with a disgraceful failure to combat the Al-Shabaab terrorist movement in favor of subjugating federal member states.

Al-Shabaab’s terrorist operations were covered up after Yasin became head of Somali intelligence. He was able to plan to penetrate the Qatari sabotage project into the pillars and joints of the Somali state under the guise of charitable doors and providing material and humanitarian support to the Somali people.

Yasin plays the role of material mediator between Al-Shabaab and Doha, as he smuggles money to the movement to carry out its terrorist operations in Somalia and the neighboring countries of Ethiopia and Kenya, the publication alleged.

In August 2018, Farmaajo appointed Yasin, then director of the presidential palace and deputy head of the intelligence service, to succeed Major General Abdalla Abdallah at NISA in a presidential decree that included several changes in the army, intelligence, and police.

Before his ouster by Prime Minister Mohamed Hussein Roble, albeit under controversial circumstances, Yasin had managed to manipulate institutions in Somalia, further placing himself as the most trusted ally of President Mohamed Abdullahi Farmaajo.

He established strong relations with Yusuf al-Qaradawi and became the mediator of funds between the Doha regime and terrorist groups in Somalia before becoming head of the presidential office in Mogadishu in May 2017.

In January 2017, the Somali Wadajir Party filed a lawsuit against Yasin to the Banadir Provincial Court in Mogadishu, accusing him of involvement in an attack on the party’s headquarters, which resulted in the injury and arrest of opposition politician Abdirahman Abdishakur Warsame and the killing of five of his guards.

Under Yasin’s supervision, Qatar had become a close ally of Somalia, further leading to cut-throat competition from the Gulf and the Horn of Africa. Now almost being sworn in as a legislator after a fraudulent poll, many analysts believe Yasin is keen to install Farmaajo for the second term.

Somalia has already failed to conclude elections based on the recently signed agreement, which set February 25 as the deadline. Upon conclusion of the Lower House elections, legislators will be electing the next president, who will serve for a term of four years.