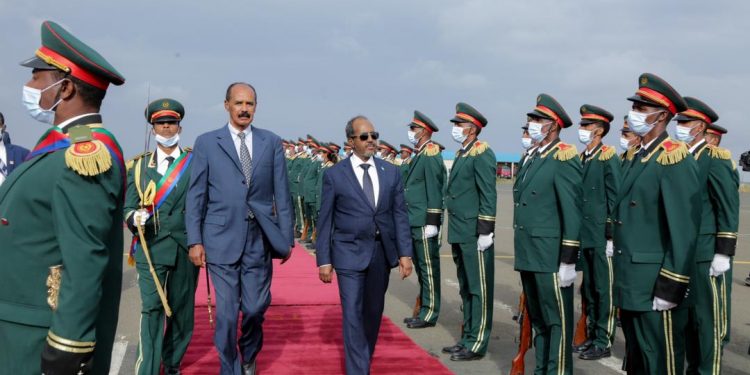 While in opposition, Hassan Sheikh was on the frontline calling for the bring back of 5,000 Somali cadets training in Eritrea, whose recruitment has been a subject of discussion in the Horn of Africa nation, almost triggering chaos in the country.

On Saturday, Hassan Sheikh was received in Asmara on Friday by his colleague Isaias Afwerki, a strongman whose overstaying in power has been subject to criticism. The president said he will be focusing on strengthening the relationship between the two countries.

“It is an honour to have been welcomed to Asmara by H.E Isaias Afwerki, the President of Eritrea for the beginning of my official state visit. I look forward to discussing key issues relating to further strengthening our two nations’ bilateral relations,” he said.

But the trip will be overshadowed by the actions which Sheikh Mohamud might take once he visits the over 5000 soldiers training in Eritrean and whose welfare has been under public scrutiny. The soldiers were clandestinely recruited in 2019 without the knowledge of their families.

Investigations done by Garowe Online placed former President Mohamed Abdullahi Farmajo and ex-spy chief Fahad Yasin on centre stage. Sources revealed that the masterminds lied that the soldiers were to be taken to Qatar, only to land in Asmara.

Despite protests by members of their families, Farmajo’s administration had denied the troops’ presence in Eritrea, only to admit it after exclusive investigations by several media houses. Their families waged protests across the country calling for their return.

And a report from the United Nations special rapporteur to Eritrea did hint that the soldiers participated in the Tigray massacre in Ethiopia where the Eritrean troops were also actively engaged, but both the Somalia and Ethiopian governments vehemently denied the allegations.

While reports suggested that many soldiers may have died in the Tigray war, some claimed a number of them have died from natural causes including diseases. The government of Somalia has remained mum over the reports, even with some proof from credible investigations.

During the handing-over ceremony in Mogadishu, Farmajo did hand over files to Hassan Sheikh for the trainees, while asking him to facilitate their return home. This may have guided Hassan Sheikh’s four-day trip to Eritrea, where the issue of training soldiers will be most likely addressed.

President Hassan Sheikh was invited by the president of Eritrea Isaias Afwerki for bilateral talks with the invitation coming shortly after Somalia elected the new president. The president will visit Somali soldiers who are believed to be just over 5,000 soldiers.

Farmajo had been accused of planning to rig the May elections using the troops in Eritrea but his staff denied the claims. Eritrea started working closely with Somalia during the administration of Farmajo, whose tenure was eclipsed by controversy.