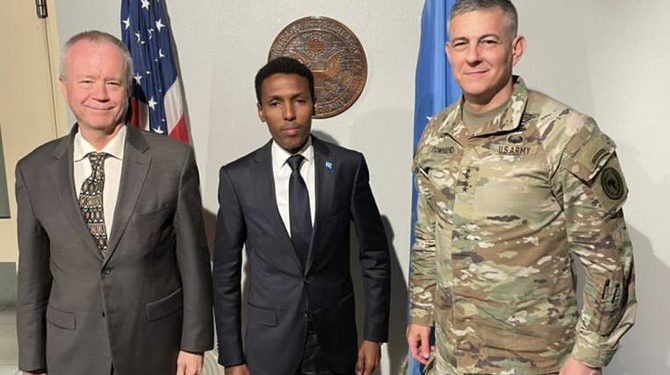 MOGADISHU,Somalia- The Chief of Defense Forces General Odowaa Yusuf Rageh on Wednesday held closed-door meetings with top officials from the United States, just a few days after the Al-Shabaab militants ran over a police station in Mogadishu.

The army chief, who has been at the helm since 2019, discussed security matters with the commander of the US Africa Command, General Stephen Townsend, and the new US ambassador to Somalia, Larry Andre.

During the trip, the officials visited the Balligodle airbase, which hosted American soldiers for decades in the country. It’s in the airbase that the Americans have been training the Danab Special Forces, who are critical in the fight against Al-Shabaab.

“Ambassador André and US Africa Command General Townsend met with U.S. military serving in Baledogle with SNAForce and AMISOM Somalia’s Ugandan contingent,” read a tweet by the US embassy in Somalia.

“Following the visit to Baledogle, Ambassador André and General Townsend had a productive discussion with Chief of Defense Forces General Odawa Yusuf Rage focused on mutual security interests in Somalia.”

The visit also comes just a year after the Department of Defense withdrew soldiers from Somalia, further leaving the country in an awkward state. The withdrawal was sanctioned by former President Donald Trump, who repositioned the troops to Kenya and Djibouti.

But in recent weeks, the Department of Defense has been reviewing the possibility of redeploying the troops to Somalia to aid the African Union Mission Forces and the SNA troops in fighting the Al-Shabaab. Already, some of the forces are operating in Wajir, Kenya.

Besides helping train the Danab Special Forces, the US Africa Command has been instrumental in giving ground forces necessary aerial surveillance during operations against Al-Shabaab. Since the exit, the airstrikes have, however, drastically reduced.

Further, the trip also comes when the country is holding elections where security forces have been accused of directly interfering with the polls. The US issued a stern warning against individuals it called saboteurs, noting that it would restrict the issuance of visas to them.