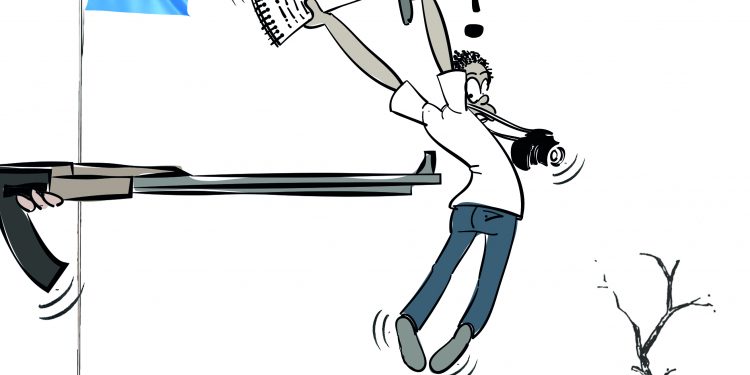 MOGADISHU, Somalia – Somali government under pressure after police detained and brutally beaten journalists while covering a suicide car bomb and gun attack in the capital Mogadishu on Wednesday.

The police harassment against the media workers took place in Kahda district, south of Mogadishu, shortly after the Al-Shabaab car bombing at a police station that killed one officer and wounded several.

“A police officer has approached me and asked why I was filming the blast site, and then hit him in hand with his AK-47 gun before the arrest and forcing us to lie on the ground,” said Ismail Mohamed, Somali Cable TV camera operator.

Major Abdifatah Aden, the spokesman of the Police Force, apologized for the outrageous mistreatment against the journalists and said they have arrested the officers and are subjected to an investigation.

Al-Shabaab has carried out simultaneous attacks involving car bombs in different parts of the capital. The country is facing electoral and security crises, with leaders in power are busy with their re-election.

The elite squad of the Police has been criticized for abuses against the journalists and repression of political figures, mainly the opposition members. Also, Farmaajo used them in the election meddling.

Press freedom activists say they are apprehensive about the continued threats and harassment against the reporters in Somalia that had already had a chilling effect on them and their daily journalistic work.

Somalia authorities have been urged to protect the journalists following recent incidents in Mogadishu.

The media staff says they go to extreme lengths to report on sensitive and controversial issues in the public interest. During Farmaajo’s presidency, the repression of journalism and freedom of expression in Somalia mounted dramatically.

Last year alone, at least 65 journalists were arbitrarily detained, and seven newsrooms were raided while two journalists were killed and several wounded across the country, according to a press Watch.

Al-Shabaab has also been a source of the assassinations of the Somali journalists, with Jamal Farah, a vocal critic of the group’s terrorist activities was killed in northern Galkayo city in March last year.

The Puntland State of Somalia has this week sentenced two militants to death for the murder of the prominent journalist while several others who played a role in the killing were slapped with jail terms.

Somalia is categorized as one of the most dangerous countries globally for journalists, as they face threats from authorities, armed private individuals, and the al-Shabab terrorist group.