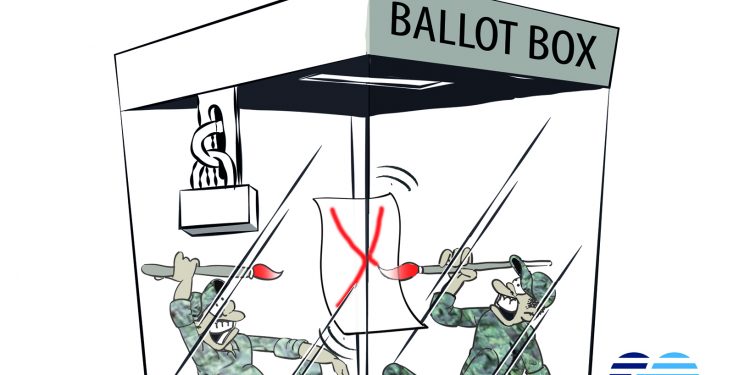 MOGADISHU, Somalia – As the presidential election draws closer, the outgoing Somali president Farmajo is planning to bring back thousands of soldiers trained in Eritrea, a source has confided to the Garowe Online, in what could raise the eyebrows in the Horn of Africa country.

The return of the troops comes as Farmaajo is facing a re-election debacle in Mogadishu.

According to the source, Farmaajo wants to transport the soldiers on chartered planes. The cadets were secretly dispatched to Eritrea in 2019-2020 for training after being lured for a job in Qatar.

Multiple reports indicated that the soldiers could be around 5000-7000, and authorities in Mogadishu had initially denied their presence in Eritrea until their families and the opposition protested, seeking answers on their whereabouts.

And now, reports indicate, Farmaajo, whose term expired on February 8, 2021, wants the troops home to “facilitate his vote-rigging plot.” The presidential election would kick off this year after the conclusion of the Lower House vote, whose deadline is February 25.

The outgoing president faces stiff competition from former Presidents and PMs and a dozen other candidates united in an alliance to unseat Farmaajo, who stayed in the office one year beyond his 4-year term.

Qatar, which has often been accused of perpetuating impunity in Somalia, has allegedly agreed to cater for air tickets for the soldiers as part of her progressive relationship with Farmaajo. Initially, Garowe Online has learned that the soldiers had been lied to that they will work in Doha during the 2022 World Cup being airlifted to Asmara.

Mogadishu has contacted Turkish Airlines to airlift the soldiers home, but authorities in Ankara ruled out that approach, the source added. It’s not clear why Turkey rejected this offer even after Qatar offered to pay for the airfare.

The soldiers’ role in Tigray conflict

A report done by UN Special Rapporteur to Eritrea confirmed last year that Somali troops training in Eritrea had been involved in the atrocities committed in Tigray, noting that they crossed over from Eritrea to the Holly city of Axum.

But in protest, both the Ethiopian and Somali governments denied the claims, arguing that the rapporteur was biased. They challenged the United Nations to table sufficient evidence even as Somalia admitted for the first-time presence of her troops in Eritrea.

Early this month, the Globe and Mail also reported that Somali soldiers fought in Ethiopia, leading to a rebuttal from the Federal Government of Somalia. The Somali government now wants the Canadian-based reputable publication to verify the claims or face litigations.

Eritrea National Defense Forces were linked to the Tigray war, a claim which would later be established by the United States and the United Nations. The soldiers were hurriedly withdrawn in 2021 after an international uproar but are said to have sneaked back to help Ethiopian troops who are fighting Tigray rebels.

Isaias Afwerki, the Eritrean strongman who enjoys close ties with Fahad Yasin, is backing Farmaajo to stay in power. Afwerki and Farmaajo have former formidable friendships, leading to a strong partnership between Somalia and Eritrea.

Farmaajo is keen to retain his seat even after having pledged to serve for only one term when he took over in 2017. The opposition accuses him of plotting to rig elections by using soldiers allied to him to cause anarchy in the war-torn nation, which is now behind the electoral schedule.

Like Qatar, Turkey has been battling against claims of interfering with Somalia’s internal affairs despite various bilateral cooperation with the Horn of Africa nation, which has struggled with instability for decades.

Somalia’s opposition alliance has often accused Ankara of facilitating political instability through the training of elite Gorgor troops and the Haramacad police contingent, who are accused of playing politics during the execution of their responsibilities.

The troops have often been linked to harassment of opposition leaders, civil society members, and journalists, particularly those who oppose outgoing President Mohamed Abdullahi Farmaajo. In the troubled Gedo region, Beletwyene and Dhusamareb have always triggered tough questions.

In defense, the government always maintains the troops are solely used for security reasons, more so the first against Al-Shabaab. The US has been on the frontline, discouraging authorities in Mogadishu from “misusing” the soldiers for political reasons.

The Federal Government of Somalia [FGS] has been pushing for AMISOM exit and rejected AU’s proposal to turn the force into AU-UN hybrid mission. The government wanted an internal arrangement, but a joint deal has been signed.

Like Turkey, Qatar is no stranger to controversy in Somalia’s internal affairs. Fahad Yasin, the presidential advisor eco served as National Intelligence Security Agency [NISA], is said to be having solid ties with Doha, which is often accused of instilling political instability in Somalia.

Farmaajo is a frequent visitor in Doha, leading to his fallout with the United Arab Emirates [UAE]. Prime Minister Mohamed Hussein Roble has recently been to Ankara and Abu Dhabi to push for Somalia’s social-economic development, a reason why Turkey could have rejected the offer to airlift the troops.