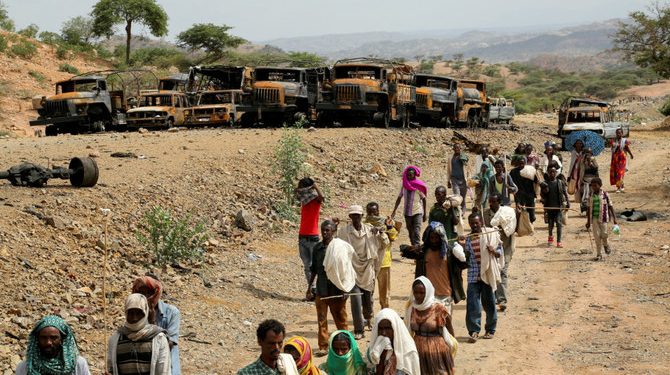  At least 108 civilians killed this month in Tigray airstrikes: UN

GENEVA: At least 108 civilians have been killed since New Year’s in a series of airstrikes in the war-torn northern Tigray region of Ethiopia, the United Nations said Friday.

The UN also warned of a looming humanitarian disaster in the region, with its food distribution operations on the verge of grinding to a halt.

UN Secretary-General Antonio Guterres said on Twitter: “My appeal to the parties: stop the fighting in all its forms. All people who need humanitarian aid must receive it as quickly as possible. It’s time to start dialogue and reconciliation.”

Northern Ethiopia has been beset by conflict since November 2020 when Prime Minister Abiy Ahmed sent troops into Tigray after accusing the region’s ruling party, the Tigray People’s Liberation Front (TPLF), of attacks on federal army camps.

“We are alarmed by the multiple, deeply disturbing reports we continue to receive of civilian casualties and destruction of civilian objects resulting from airstrikes in Ethiopia’s Tigray region,” rights office spokeswoman Liz Throssell told reporters in Geneva.

“At least 108 civilians have reportedly been killed and 75 others injured since the year began, as a result of airstrikes allegedly carried out by the Ethiopian air force.”

She detailed a series of airstrikes, including the January 7 attack on the Dedebit camp for internally displaced persons, which left at least 56 dead and 30 others wounded, of which three later died in hospital.

On Monday, 17 civilians were reportedly killed and 21 injured after an airstrike hit a flour mill, and on Tuesday, the state-owned Technical Vocational Education and Training institute was hit, reportedly killing three men, said Throssell.

Numerous other airstrikes were reported last week, she added.

“We call on the Ethiopian authorities and their allies to ensure the protection of civilians and civilian objects, in line with their obligations under international law,” said Throssell.

“Failure to respect the principles of distinction and proportionality could amount to war crimes.”

Meanwhile, the UN’s World Food Programme said its distributions were at an all-time low, with the escalation of the conflict meaning that no WFP convoy has reached the Tigrayan capital Mekele since mid-December.

“Life-saving food assistance operations in northern Ethiopia are about to grind to a halt because intense fighting in the neighborhood that has blocked the passage of fuel and food,” WFP spokesman Tomson Phiri told reporters.

“After 14 months of conflict in northern Ethiopia, more people than ever need urgent food assistance.

“With no food, no fuel, no access, we are on the edge of a major humanitarian disaster.”