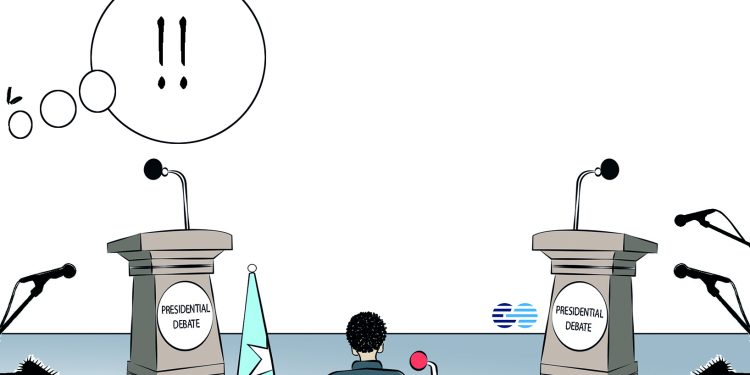 𝐄𝐃𝐈𝐓𝐎𝐑𝐈𝐀𝐋| Somalia is heading towards the most critical stage of elections. We will hopefully see the country elect a new President and turn a page on a challenging year of waiting.

But as the country awaits the outcome of the indirect elections, just how should the general public be involved and know who their next President will look like? The lesson we carry into this election is that we must never lay the ground for a surprise leader who may turn out to be another dictator.

So one solution for the people of Somalia to avoid this kind of scenario is to check the credentials of the presidential contenders through a public debate. Somalis will generally not be voting for their President, but that doesn’t mean they cannot control who becomes one. And through an organized, somewhat moderated, and balanced debate, we will have an opportunity to pick out the apples from the oranges and leave out the chuff.

Ahead of elections, we will need a public debate where Presidential contenders can sit on a panel and field questions through a moderator who will have to grant each opportunity to respond.

Somalia’s current political arrangement is mostly a compromise. We accepted indirect elections because the security and political situation would make it cumbersome for universal suffrage. And yet the leaders to be elected indirectly will determine the country’s fate for the next four, or even more, years to come. To be sure that we will not be giving our house keys to another dictator or thug, we must subject all contenders to public scrutiny. And the best available tool is a public debate organized by an entity with a proven pedigree. Such an entity must have a proven professional non-partisan approach to politics and must focus on supporting Somalia’s cause and its people. In short, it must have been around these shores for a long time, not just recent germination that could quickly wilt after elections.

There is an advantage in having that arrangement for a Somalia debate. One is that it offers the eligible voters, the newly elected MPs, to know who their candidates are and make up their minds on who to vote for. For a long time, Somalia’s indirect politics only attracted the moneyed guys who said little and pushed their levers using the dollars at hand. In turn, every one of our elections has sprung surprises, giving us people who had no national interests at heart, just their own.

This time, we demand that contenders speak out their stances on what they feel about basic things that affect Somalia: al-Shabaab, debt, poverty, drought, and natural resources. We also want to hear how they relate to Somalia’s neighbors or international partners. Somalia’s future will need leaders who decide based on policy, not a personal whim. And so, we need to know which of the candidates will be ready to defend policy even when it hurts their ego. More importantly, we need to know who will support federalism or kill it at the altar of feeble nationalism.

A public debate is something all presidential contenders should join in and explain their candidature to the public. We are glad that most candidates have expressed readiness to participate in a fair debate. We call on the rest to be ready.

Put, Somalia’s next President will determine the survival of our country. It would be foolish of us if we did not insist on hearing what their plans are.