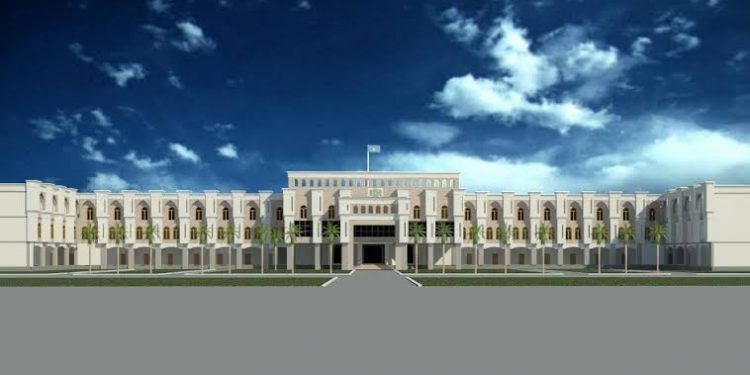 NAIROBI, Kenya – Sharp differences have erupted in Somalia’s embassy in Rome, the capital of former colonialist Italy, in what could trigger debate about the conduct of diplomats who have supposed to foster relationships among friendly nations.

In return, reports indicate, the ministry appointed one Abdirahman Sheikh Nur as the Charges d’Affaires, triggering sharp divisions in the process. The embattled envoy argues that the acting envoy requires appropriate diplomatic credentials for Italy and, therefore, ought to have come from among the embassy staff.

Previously, Ahmed Abdirahman Sheikh Nur worked in the same capacity in Somalia’s embassy in Lusaka, Zambia; thus, questions arise about the decision to redeploy him to Italy despite the mission having a number of qualified staff there.

“Every time I go on holiday, the embassy’s work is run by an acting representative of the embassy. If a new deputy is to be appointed, they must be an embassy employee,” said Ambassador Abdirahman Sheikh Issa.

The estranged envoy argues that Ahmed Abdirahman Sheikh Nur and two of his allies forced entry into the embassy building in Rome last Friday and have since refused to allow the ambassador and other staff members to access the building leading to chaos.

Ambassador Abdirahman Sheikh Isse, multiple sources say, was planning to activate Italian security officials to kick the three out of the building on Tuesday [tomorrow]. The ministry is yet to address the issue despite it leaking to the press.

Italian authorities, however, are said to have affirmed the latest changes in the embassy but are yet to offer Ahmed Abdirahman Sheikh Nur with requisite documents.

On March 28, a memo from the ministry of foreign affairs reaffirmed that Ambassador Abdirahman Sheikh Isse had been summoned for internal consultations. President Mohamed Abdullahi Farmaajo has been appointing envoys, although his tenure ended more than a year ago. Concerns have been increasing over the unclear status of a growing number of recalled envoys and diplomatic staff from Somali missions over the past few months.

The ministry has also begun to appoint several mid-level diplomatic staff, most of whom are said to be political appointees. The move is a clear violation of the current moratorium on civil service hiring, but the ministry is said to be taking advantage of the uncertain transition period. It is unclear how the embassies will absorb the new staff, as embassies face budgetary challenges with most diaspora communities stepping in to support the budget gaps.

Somalia continues the battle to contain violent extremism and political disputes, with the protracted electoral process close to its conclusion. 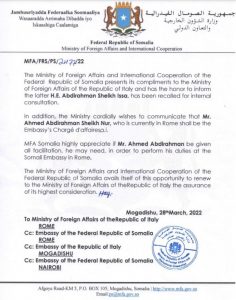