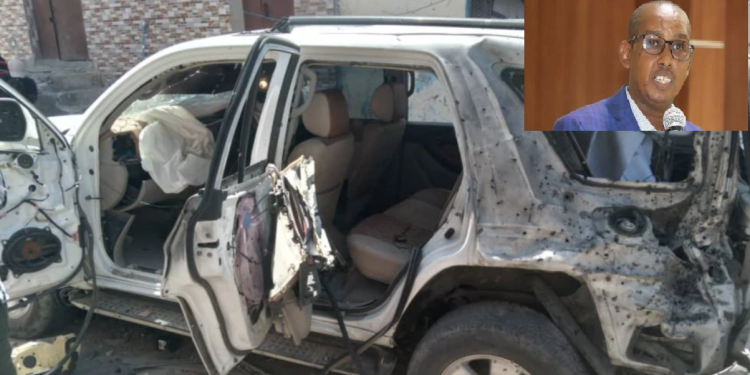 MOGADISHU, Somalia – A suicide bomber on Sunday targeted a senior Somalia's government official just days after another deadly attack in the Somali capital Mogadishu, amid ongoing political wrangles involving the opposition and the fragile UN-backed government.

It's not clear where Mohamed Moalimuu was going but Sunday is a normal working day in Somalia, a country where the majority of residents subscribe to Islam. The Dabka Junction is notorious for such incidents based on the data available in the media.

A photographer at the scene of the explosion reported seeing body parts lying on the ground outside the house of Mohamed Ibrahim Moalimuu, who was rushed to a hospital, Al-Jazeera reports. The number of casualties is not yet known.

Moalimuu has been giving official updates on the current political situation in Somalia including the recently concluded National Consultative Council [NCC] in which Prime Minister Mohamed Hussein Roble was leading following an electoral dispute.

The attack also comes just a few weeks after outgoing President Mohamed Abdullahi Farmaajo differed with Roble over security and elections in Somalia, leading to the NCC meeting. At one point, Farmaajo purported to have suspended Roble.

But the standoff was solved after the meeting which was also supervised by the international partners, who are important in Somalia's development agenda. Stakeholders agreed to have Lower House elections concluded by February 25.

Al-Shabaab has taken responsibility for the attack. The group is known to wage such acts within and outside Somalia. The militants usually take responsibility by publishing on their propaganda media outlets.

There have been deliberate efforts to degrade the Al-Shabaab with the African Union Mission Forces taking responsibility for such operations. Also, the Somali National Army has been carrying operations across the country.