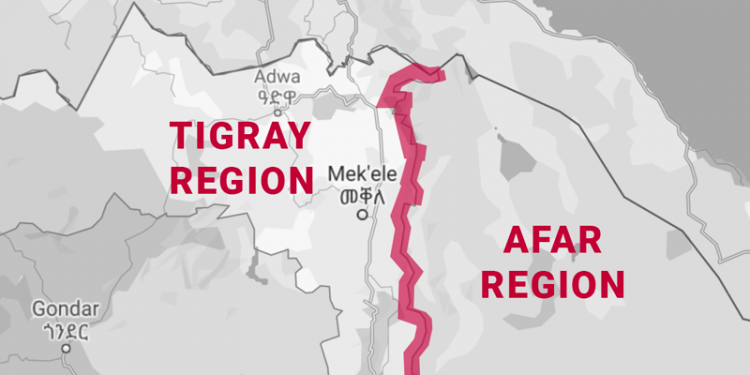 The Tigray Defense Forces [TDF] is plotting a major assault against the Afar regional troops accused of targeting aid workers trying to access Tigray from the south amid reports of ravaging hunger.

Several trucks cleared from Addis Ababa are reportedly set to arrive in Tigray, with reports linking Afar regional troops to the latest quagmire. Addis Ababa has already relaxed the state of emergency in Tigray.

TDF, a rebel group, now facing the government of Ethiopia, said it was taking “robust actions” in Afar in response to pro-government forces, a month after the rebels’ withdrawal had raised hopes of ending more than a year of the war.

The United States is now on high alert as the crisis worsens in Ethiopia, warning that there is a need for state actors and the rebels to embrace a ceasefire for the sake of stability in the struggling Horn of Africa nation.

“Reports of renewed fighting in the region are very concerning, and we repeat our calls to all actors to cease all offensive operations, which also hinder that humanitarian access that we all know is so crucial,” State Department spokesman Ned Price told reporters.

The spokesperson welcomed a push by Prime Minister Abiy Ahmed’s government to shorten a state of emergency imposed in November as the rebels seemed poised to threaten the capital.

Price voiced hope that the decision “will be approved soon” and urged the government to free all detained under the state of emergency. The United States has heavily criticized Ethiopia, a longtime ally, over human rights concerns in the war against the Tigrayan rebels, including restrictions on aid delivery.

David Satterfield, the special envoy for the Horn of Africa, and Molly Phee, the assistant secretary of state for African affairs, encouraged Abiy’s government to “seize what we believe is a current opening for peace,” including by reaching a ceasefire, Price said.

Prime Minister Abiy Ahmed had earlier this year called for national reconciliation, but he’s yet to convene any meaningful meeting. Both parties have been giving conditions, with TDF now accusing Addis Ababa of relying on government help from Eritrea.

Also, the republic of Turkey has directly linked to the Tigray war after investigations by Politico established that Turkish-made drones were used in firing against innocent civilians in Tigray. Turkey has persistently denied these allegations.