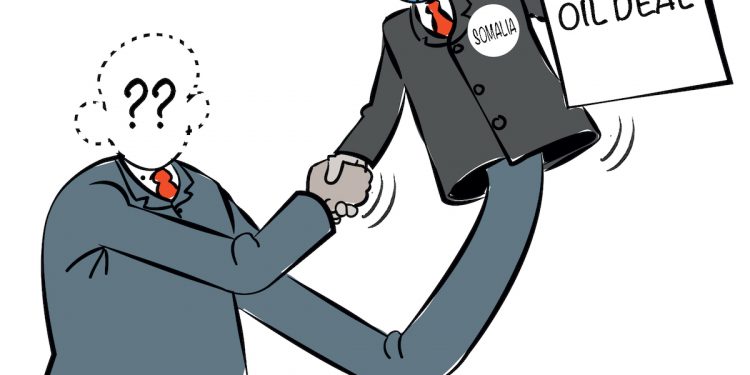 Yet the trace from the dirt pool of this bogus arrangement could very well ensnare them if no whip is cracked on the culprits.

The noise emerged on Saturday after Somali Minister of Petroleum and Minerals Abdirashid Mohamed Ahmed announced he had signed seven Production Sharing Agreements (PSAs) with Coastline Exploration, an American firm in Houston, Texas.

Ahmed appeared to gloat over the deals, indicating they were bringing Somalia closer to tapping into its long-held potential for harvesting hydrocarbons. He explained how the money earned from these deals would be good for the country’s economic situation.

There is no doubt that Somalia’s potential for hydrocarbons is enormous. And given the recent seismic data collected between 2014-2016, Somali seas are abundant.

Except this was an awful deal. It is now clear someone tried to trick the country, whose attention is on who becomes elected next President, by signing contracts that would hurt the country in the future.

Ahmed’s seven Production Sharing Agreements with Coastline Exploration had been signed earlier, with the announcement only choreographed to hoodwink the public that it is a recent thing. The PSAs would, in theory, allow Coastline to survey the pre-defined areas for oil and gas in pursuit of a considerable commercial opportunity that would provide Somalia with a straightforward path for economic growth. It would also offer the most-deserving people a means to improve a presently below-average standard of living.

But it came when the government itself had banned such agreements. President Farmaajo had last year in August suspended negotiation or agreements ostensibly to guard against losing politicians exposing the country to risks they will not be around to face. It was also about protecting suspected theft of public resources by the very political figures well aware they won’t have another chance to loot.

If these were the aims of the ban, then both Farmaajo and Roble must bring us the heads of the people who violated it. It was shocking to hear the Minister insist the President had given him the go-ahead to negotiate and sign the deals. And yet it was surprising to listen to the Prime Minister, the supposed supervisor of ministers, disown the value. Just who is in charge of this government?

The question may never be answered. But if Mr. Roble is in charge of his cabinet, he should indeed ensure the violator faces the music.

We say this because there is a history. And these cracks in government over the deal may be a plastic, public show. For example, the Auditor-General’s office on Sunday claimed it had nullified the agreement and sent the document for investigations to the Attorney-General. But we hope it wasn’t another show to sweep the issue under the carpet and wait for the next leader to shoulder the burden.