Turkey has its largest overseas military base in Mogadishu which was built with over $50 million in 2017 and trains units of the Somali military, known as Gorgor elite force. 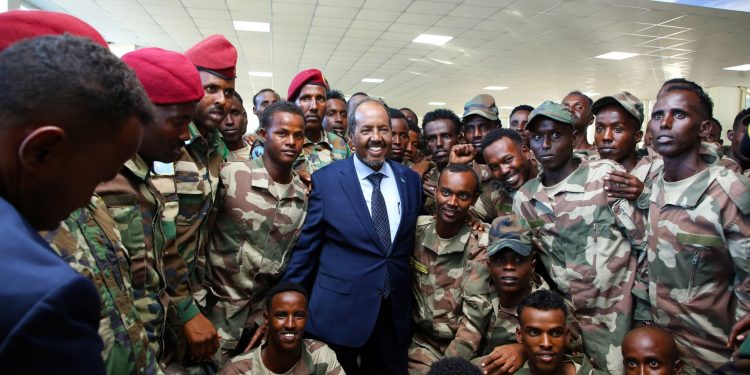 ANKARA, Turkey – Somali President Hassan Sheikh Mohamud on Tuesday visited dozens of Somali military trainees at Isparta in the republic of Turkey during his three-day official trip which is set to end on Wednesday before getting back to the country for other official businesses.

The Somali president chose Turkey as his second destination after taking over from Mohamed Abdullahi Mohamed better known as Farmajo. During his first foreign trip, Hassan Sheikh Mohamud visited United Arab Emirates [UAE], which had strained relations with the country.

On his official Twitter handle, Hassan Sheikh lauded the trainees for their sacrifices to the people of Somalia, adding that he was proud of their decision to join the armed forces ahead of the major task to fight Al-Shabaab militants.

Further, the president hailed Turkey for being a reliable security partner given Ankara’s massive investment in training and equipping security forces in the country. Turkey trains the elite Gorgor Special soldiers and Haramacad police officers who are critical to security arrangements in the country.

“I visited our brave soldiers undergoing commando training in Isparta, Turkey, with the assistance of the Turkish government,” he said. “I met some great future Somali military officers and leaders and I am proud of them all. We are grateful to Türkiye for this valuable security assistance.”

During the tenure of Mohamed Abdullahi Farmajo, the Gorgor and Haramacad officers were accused of meddling in the internal affairs of the country with opposition leaders accusing them of harassment. However, Turkey persistently denied the claims.

But Hassan Sheikh now maintains the war on Al-Shabaab requires well-trained officers who can fight the ideology through the military. He also indicated possible future negotiations with the group but did not give specific timelines.

Earlier, the president addressed a gathering where he emphasized the need for a strong mutual relationship between Somalia and Turkey which has been on a good scale in the past. He said the cooperation between the two nations will continue under his leadership.

“It was an honour to deliver a keynote speech on Somalia’s beneficial relationship with Turkey at setavakfi today. I presented the successes of our two sides’ strong partnership in many areas of mutual benefit and our hope for further strengthening this with new opportunities, ” he said.

Turkey has its largest overseas military base in Mogadishu which was built with over $50 million in 2017 and trains units of the Somali military, known as the Gorgor elite force.