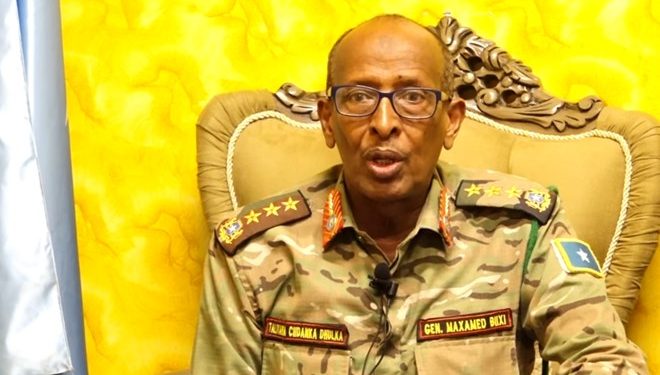 A top Somali National Army [SNA] commander has been linked to unprecedented interference of the ongoing Lower House elections, in a dramatic move that could further impair the credibility of the polls.

Somalia is expected to conclude Lower House elections by February 25. After that, the MPs and senators would participate in presidential polls where outgoing President Mohamed Abdullahi Farmaajo will be candidates.

On Monday, General Mohamed Tahlil Bihi arrived at the ancient town of Barawe in Southwest ahead of elections of 13 MPs, with critics now accusing him of plotting to install Villa Somalia allied candidates. Recently, he was linked to flawed elections in Beletwyene, Hirshabelle.

“Just arrived historic town Barawe   Southwest State to assess the security on the ground before the scheduled elections in the town,” Bihi, the Infantry commander, announced his arrival in Barawe. Al-Shabaab militants often attack this town.

After his arrival, Somalia’s political bigwigs expressed concerns over Gen Bihi’s interference in politics, which contradicts the agreed-upon polls procedures calling for armed forces members not to interfere in politics, adding that Bihi’s presence will further fuel the electoral fraud.

Elsewhere, Abdullahi Kulane, NISA’s ex-human Resource head and deputy boss, arrived in Galmudug Monday to run for a seat in parliament, joining active politics. The Fahad’s right-hand man was accused of several issues, including Ikran Tahlil’s murder and barring of politicians from traveling to Gedo.

In November, Yasin Farey, the acting intelligence director, was elected to Lower House in Dhusamareb in a controversial vote. Fahad Yasin, ex-NISA head, and Kulane are trying to join the new parliament; all seek impunity after being accused of committing crimes during Farmajo’s presidency.

Somalia still practices the indirect polls, otherwise called the 4.5 model, where elders play a significant role. There were concerns that the Al-Shabaab militants would use Somalia’s current fragile political environment to install their agents in parliament.