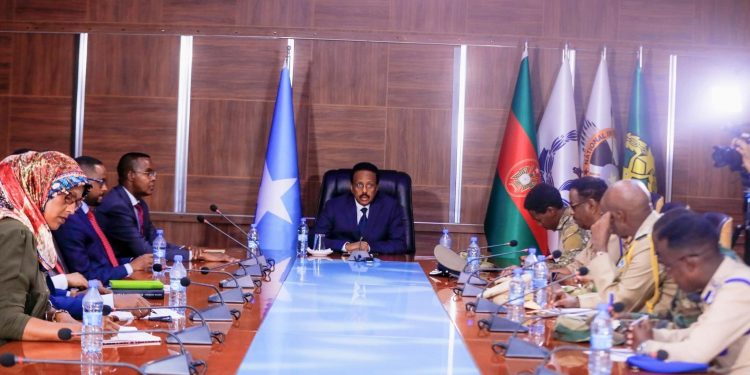 The Al-Shabaab took responsibility for the attack, which left over ten people dead at Aden Adde International Airport in Mogadishu on Wednesday, in an episode that members of the international community widely condemned.

Among those he met was Governor of Banadir Omar Finish, Commanders of the Armed Forces, Police, Corrections Services, and Security and instructed them to strengthen the security of the country and the capital ahead of elections.

Farmaajo, reports indicate, listened to the police and intelligence services about preliminary investigations to both Mogadishu and Beletwyene attacks. In Beledweyne, reports indicate, about 50 people were killed in twin blasts, with 120 others critically injured.

The Beledweyne attack took the life of Amina Mohamed Abdi, a seasoned young legislator who has been critical of Farmaajo’s administration. The MP was on the frontline calling for justice to the family of Ikran Tahil, a young NISA agent who was killed under mysterious circumstances.

“We are at war with a ruthless enemy that threatens our security and existence. The Al-Shabaab terrorists we are fighting are working to massacre the Somali people wherever they have the opportunity, so we must always be on high alert and work closely with our people who support you with intelligence,” said Farmaajo.

State media said Farmaajo instructed the commanders of the Armed Forces to reassure the Somali people during their security operations and strengthen cooperation and integration between the security agencies and the community to enhance the collaboration and trust of the people.

Farmaajo showcased he’s still in charge of National security following the recent murder of outspoken MP Amina Mohamed, termed ‘political assassination.’  There have been skirmishes between Farmaajo and PM Mohamed Hussein Roble over the control of security forces.

Roble chaired a similar meeting on Sunday with the security chiefs, defense and justice ministers, and AMISOM head to discuss the country’s security and ordered them to investigate recent attacks.