US and Kenya discuss defense ties amid heightened Al-shabaab activities 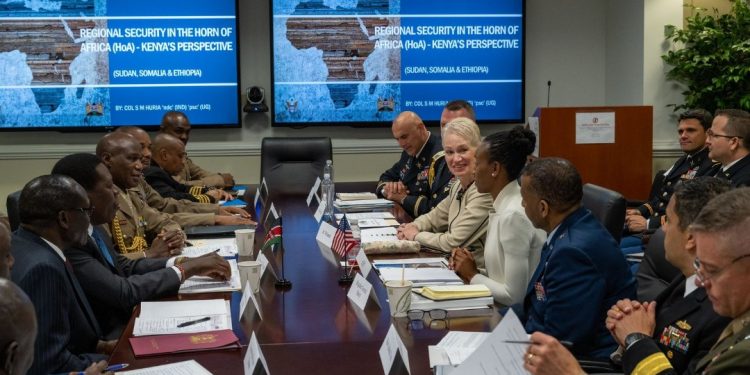 NAIROBI– The United States [US] and Kenya have renewed defense discussions by focusing much more on bilateral ties following increased Al-Shabaab activities in the East African nation, die to spill over from neighboring Somalia.

Kenya’s Defense Secretary Eugene Wamalwa and the US Assistant Secretary of Defense for International Affairs Celeste Wallander on Wednesday discussed the best way for cooperation following heightened cases of insecurity, including but not limited to Al-Shabaab’s endless attacks.

Also present in the discussion at Pentagon was Kenya’s Chief of Defense Forces [CDF] General Robert Kibochi, who has been instrumental in the fight against Al-Shabaab militants who dominate most parts of rural Somalia.

The ministry noted that both Washington and Nairobi would continue building a solid partnership involving training troops on counterterrorism matters. Kenya has been a significant beneficiary of training programs organized by the US.

At Manda in Lamu, the US has been running a Naval base attacked by the Al-Shabaab on January 5, 2020. Even with the loss of three Americans, the US has since increased the number of soldiers within the Airfield, which also has a presence of the Kenya Defense Forces [KDF].

Last year, the US repositioned a number of its troops stationed in Somalia, with a number of them now based in Kenya. Recently, the US also dispatched soldiers to Wajir county, one of the areas in the Republic of Kenya which has been struggling with the Al-Shabaab menace.

Besides persistent attacks by the Al-Shabaab on Kenyan soil, the militants also attacked KDF bases in Somalia, leaving dozens of soldiers dead. The first attack was carried out in El-Adde in 2016, with the militants also targeting Kulbiyow KDF Forward Operating Base a year later.