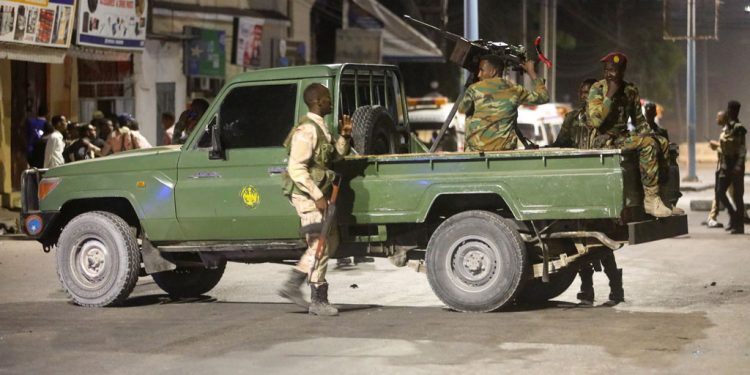 Somali security officers secure the scene of a car bomb explosion in the Kilometre 4 area of Mogadishu, Somalia January 31, 2021, Reuters

The Somalia-based Al-Shabaab militant group has intensified its violent agenda in Somalia in early January, further derailing its stabilization efforts. Somalia has been struggling with instability for decades despite deliberate local and international efforts to restore peace.

Earlier this week, the militants engaged in a targeted assassination attempt on government spokesperson Mohamed Ibrahim Moalimuu, who also doubles as senior media advisor of Prime Minister Mohamed Hussein Roble. A single militant equipped with a suicide belt targeted Moalimuu’s vehicle. He is stable and has since been airlifted to Turkey for treatment. The assassination attempt against Moalimuu comes amid sharp divisions between outgoing President Mohamed Abdullahi Farmaajo’s office and the Office of the Prime Minister.

On Tuesday, another attack left at least five people dead near a tea shop north of Aden Adde International Airport. Al-Shabaab claimed responsibility for this attack, stating that they targeted the Turkish-trained Gor-Gor brigade members.

The level of insecurity has raised concerns about the state of preparedness of the Somali security forces. As a result, the Somali Government has been lobbying to regain national security responsibilities from the African Union Forces in Somalia.

Currently, the Federal Government of Somalia and the African Union are in talks over the future of AMISOM, whose mandate is set to expire on March 2022. The African Union suggests a joint mission with United Nations in Somalia; however, the federal government had expressed reservations.

For 32 years, Somalia has been entangled in internal conflicts and violent extremism, sabotaging attempts to establish a stable federal government, even with multifaceted support from Somalia’s international partners.