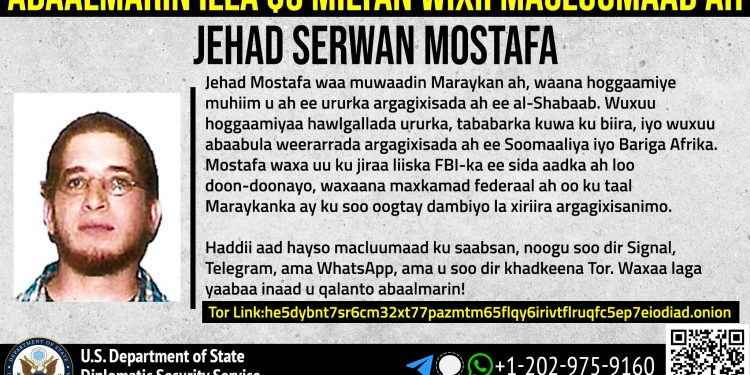 The government of the United States has issued a $5 million bounty on a senior Al-Shabaab leader, who is believed to be holding a high rank within the terrorist network’s circle, having served there for a couple of years.

State Department Rewards for Justice Program said that Mostafa, a US citizen and former resident of California, has been responsible for various attacks within East Africa, especially Kenya and Somalia.

Records indicate that Mostafa, 41, who has been under FBI radar, graduated from a San Diego college before returning to Somalia in 2005. Intelligence sources say he participated in attacks against Ethiopian forces before joining al-Shabaab in approximately 2008.

“With al-Shabaab, Mostafa has functioned in many critical capacities, including serving as a military instructor at the group’s training camps, leading foreign fighters, operating in the group’s media wing, acting as an intermediary between al-Shabaab and other terrorist organizations, and leading the group’s use of explosives in terrorist attacks,” The US State Department Rewards for Justice said Sunday.

Currently, it is believed he has continued to be the lead planning organizer of most Al-Shabaab activities targeting the Somali government and the African Union Mission Forces [AMISOM] within the federal government of Somalia.

“As a result, Mostafa continues to pose a direct threat to U.S. forces, civilians, and interests,” the State Department said.

A decade ago, Mostafa was indicted in the District of California who conspired to produce materials for terrorists, especially the Al-Shabaab, besides helping them with finances. It’s not clear where he operates from.

The United States has been helping Somalia to wage war against the Al-Shabaab militants. The US withdrew about 700 soldiers from Somalia, but there are reports that it could redeploy soldiers to Somalia to help in the Al-Shabaab war.