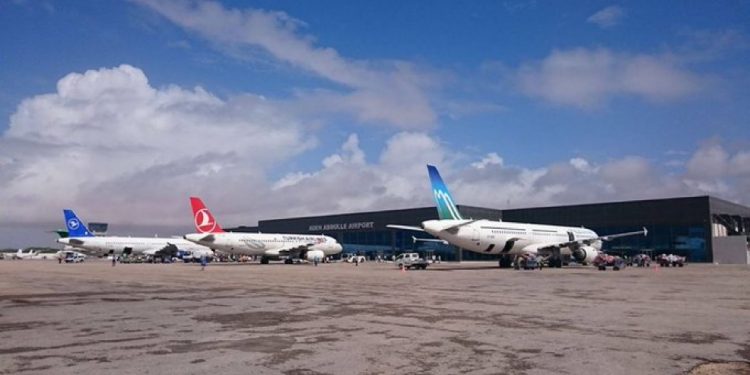 At least eight people, including five foreign nationals and two shooters, were killed and several others wounded in the attack, which comes amid a critical time of the election in Somalia, according to the police sources.

According to the spokesperson, security forces shot dead the militants whose main aim was to start shooting randomly within the facility. The flights at the busy airport were suspended during the terrorist attack on Wednesday at noon.

Reports from Mogadishu airport indicate deputy airport commander Abdirahman Omar was among those injured with two others. He has since been rushed to the hospital, but police say they will give a further update in the coming hours once initial reports are compiled.

Through proxy media outlets, Al-Shabaab claimed its fighters stormed Halane base camp in Mogadishu, which is the most protected facility in the Somali capital as it serves as AU troops’ command headquarters.

Al-Shabaab added that Somali and AU soldiers “shot dead” killed by its fighters at an ocean gate checkpoint, east of Mogadishu airport, as they make their way into the Halane compound. No word from police and AMISOM on the assault claims, which were disputed by security forces.

The Somalia-based Al-Qaeda-linked Al-Shabaab militants infiltrated the Halane base camp in Mogadishu in Dec 2014, killing three African Union soldiers and two civilian contractors. This is the second major attack within the facility in eight years.

Somali government officials have yet to confirm how long the airport will be closed, but most of them will likely be diverted elsewhere across the country. The attackers entered the airport from the marina gate.

The Al-Qaeda linked group has often targeted security forces, civilians, and government officials in their sporadic attacks, mainly in the capital. The group controls enormous sections of central and southern Somalia.